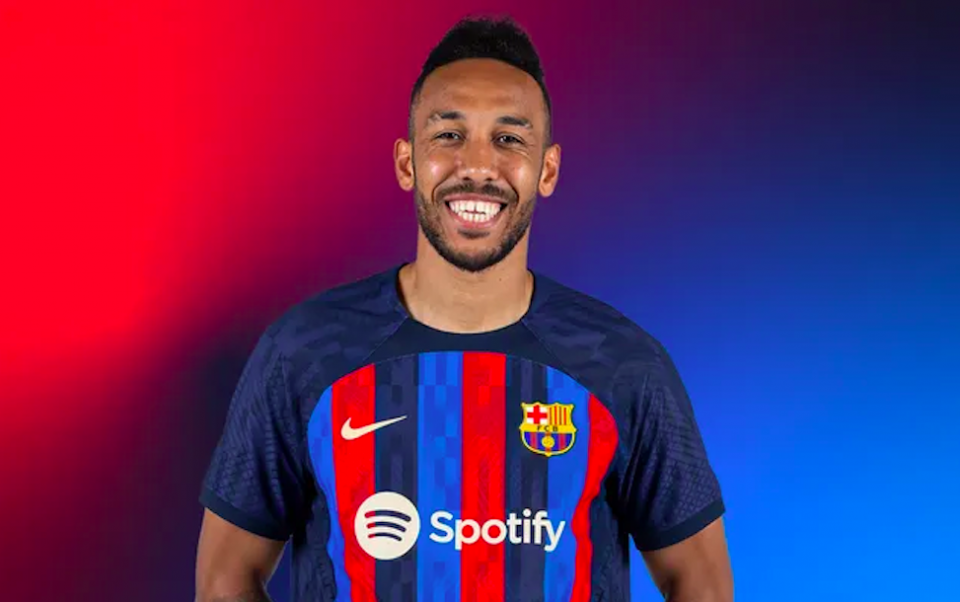 A group of masked men broke into the house of FC Barcelona forward Pierre-Emerick Aubameyang and attacked and robbed him early on Monday, the club said. His home is in Castelldefels, just south of Barcelona and the attack took place at around 1am, after the intruders climbed over his garden’s gates.

Barcelona confirmed the incident and said the player and his wife, Alysha Behague, were doing well. They have two children together – Curtys, 11, and Pierre, six. It is unknown if the children were at home during the break-in.

First reported by Spanish daily El País, authorities confirmed that Aubameyang was hit and forced to open a safe where the couple kept jewellery. The attackers allegedly threatened him and his wife with guns and iron bars.

Authorities said at least four men entered the player’s home and then reportedly fled the scene in a white Audi A3 car. The Catalan police, the Mossos d’Esquadra, are now investigating the events.

The 33-year-old Aubameyang signed with Barcelona at the beginning of the year after long stints with Borussia Dortmund in the Bundesliga and Arsenal in the Premier League. On an individual level, he was named African Player of the Year in 2015 and Bundesliga Player of the Year in 2016. Aubameyang has triple nationality: Spanish, French and Gabonese, but plays internationally for Gabon.

Aubameyang did not play in Barcelona’s 4-0 win over Valladolid in La Liga on Sunday evening. Before the attack, the footballer had just returned home from the Barça stadium, Camp Nou, where he had been on the bench. He is among the players expected to be sold as the summer transfer window ends this week, and so the club can clear its salary cap space.

Two weeks ago, new Barcelona signing Robert Lewandowski had a watch snatched from his arm as he arrived for practice at the club’s training centre.

It is not uncommon for soccer players’ houses to be robbed in Spain, though the crimes usually happen when the athletes and their families are away during matches. Among the reported victims in the past were Casemiro, Álvaro Morata, Gerard Piqué, Samuel Umtiti, Jordi Alba and former Real Madrid coach Zinedine Zidane.

Spanish police a few years ago dismantled a gang that had been robbing players’ houses during games.

Gibraltar can now officially call itself a city – 180 years late