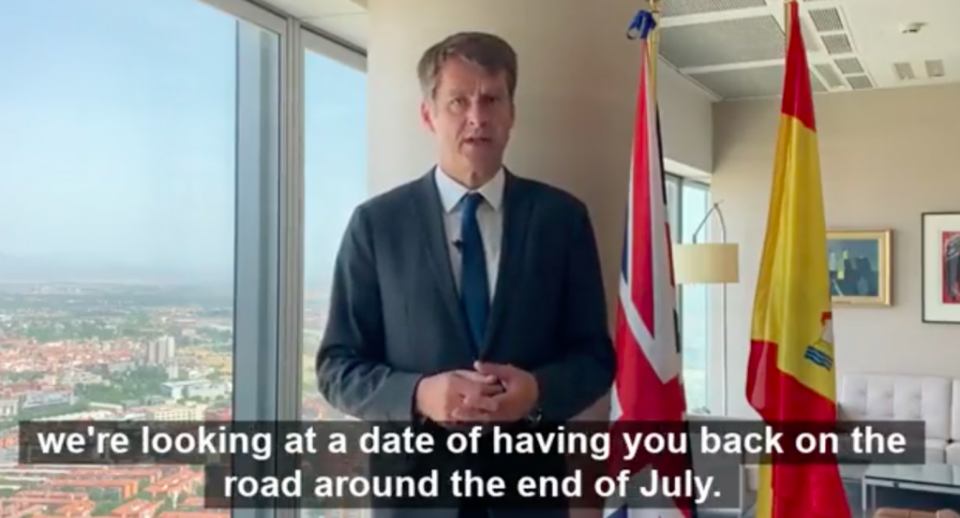 There have been many angry and exasperated reactions to the latest announcement from the British Ambassador to Spain, Hugh Elliott, who on Friday said that the ‘best estimate’ for British nationals living in Spain, who have so far been unable to exchange their driving licences for Spanish ones, is that they will be ‘back on the road around the end of July’.

The announcement came after at least 18 months of negotiations and four extensions of the validity of UK licences granted by Spanish authorities, as well as many previous updates by the British Embassy in Madrid.

Since 1 May 2022, thousands of UK licence holders who have been resident in Spain for six months or more have been unable to drive with their UK licences, even though the vast majority of other EU nations have struck deals with the UK post-Brexit for the simple exchange of driving licences.

It reportedly affects a ‘minority’ of the 407,000 UK nationals who are officially resident in Spain, as many managed to exchange their licence for a Spanish one before the deadline at the end of 2020, as advised.

In a video posted on the Embassy’s Facebook and Twitter accounts [see link below], the ambassador stressed that the authorities ‘were continuing to work every day on this’ but said he was still ‘unable to give a precise date’ for when those with British driving licenses and resident in Spain would be able to drive again.

‘The good news,’ he said, ‘is that the UK and Spain are now in agreement on the core issues that have been problematic and we’re now very close to finalising the actual text of the agreement.’

‘Once that’s happened, possibly as early as next week [now this week], there are various legal clearances, language checks and final political approvals that we and the Spanish need to go through,’ he added. ‘As this agreement will be in the form of an international Treaty, certain procedures will also be necessary, such as approval by Spain’s cabinet of ministers.’

The ambassador stressed that as the processes are not entirely in the UK’s hands, he could not make any promises about timescale, but he could give a ‘best estimate’.

‘We are looking at a date of having you back on the road around the end of July,’ he said. ‘Although this is only weeks away I know it will feel like a very long time,’ he added, saying that the authorities are doing everything they can at every point to try to accelerate and advance matters as quickly as they can.

The Embassy continues to advise residents who are unable to drive in Spain to explore local support options such as charities although Elliott did say, ‘If you find yourself truly vulnerable or know somebody who is, do contact your local consulate.’

The issue does not apply to British tourists with UK licences who are visiting Spain, and who are driving their own vehicles or renting a car during their holidays. The issue only affects UK licence holders who are residents in Spain. Visitors to Spain can continue to use their UK licence to drive in the country without the need for an International Driving Permit.

There have been around 900 comments posted on the British Embassy’s Facebook page since the announcement on Friday, with most expressing anger and exasperation at the time it has taken to resolve the issue.

While many of the drivers affected don’t understand why there can’t be another extension which allows them to drive while the deal is finalised, others continue to show little sympathy for those in limbo, arguing that they should have registered to exchange their licence before the deadline. However, there is clear evidence that many have been unable to exchange their licenses through no fault of their own, and for those who rely on their cars to live a normal life in Spain, the situation is getting desperate and there is a lot of anger.

‘Try running a business in this situation,’ Ricky McIntyre wrote on the Embassy’s Facebook page. ‘Nice if you have a driver Mr Ambassador. Why are we not getting an acceptable explanation as to why, when agreement has now been reached, we are still not getting a goodwill extension along the lines of the previous ones?’

Anne Bardot wrote: ‘Bloody ridiculous. So someone, a UK tourist of 18 years old can pass their test tomorrow and drive their car over on Monday and be legal. Meanwhile people who are experienced and passed their test under EU law cannot drive.’

Someone else wrote, ‘If it doesn’t happen by the end of July, does that mean sometime in September? We all know everything stops in Spain in August!’

However, there were also several comments thanking the ambassador for the update.

‘Best update yet,’ wrote Jamie Stephenson. ‘Sounds promising. Got everything crossed. Please have one final push to get this sorted Hugh and the team. Thank you for your efforts so far, but please don’t let us down.’

My latest update on the driving licence negotiations ⬇️. Also on https://t.co/bpDnEXZhOz pic.twitter.com/VDgZl002Fp

For people that can’t understand why our good friends in Spain are not as easy with us exBrits as they may be with other nationals.
I offer two possible reasons, 1/ our continued flouting of acceptable diplomatic behaviour over the part of Spain Britain stole that is used as a tax haven, Gibraltar. 2/ the sociopathic narcissist puppet of the terrorist George Soros that has been installed as President to destroy everything good about Spain, that it can get away wth, before another hero like Franco comes along to save both Spain and the rest of humanity from all our treasonous woke globalist puppet governments.