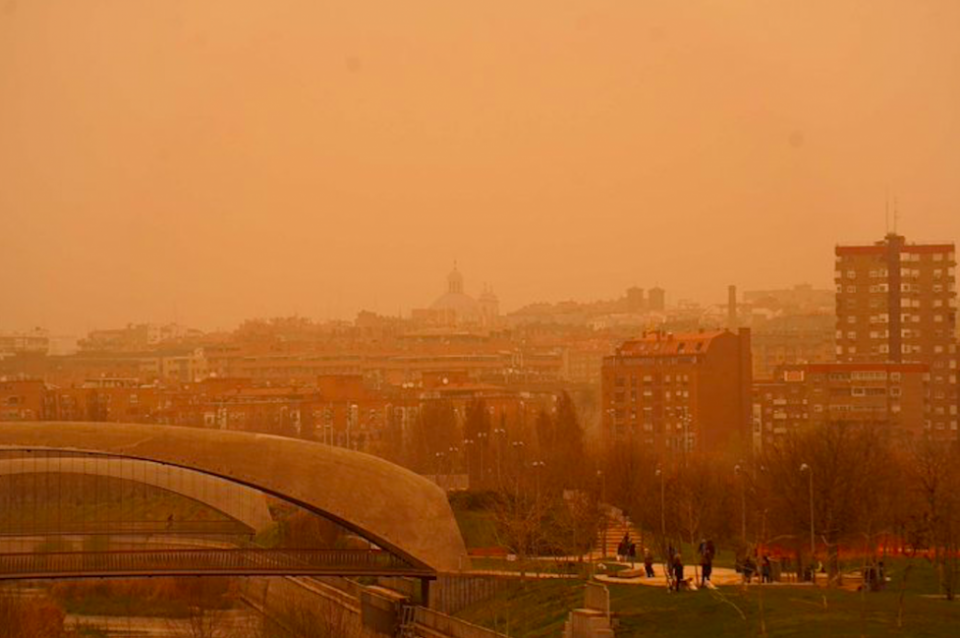 Large areas of Spain were coated with red-orange dust on Tuesday, after hot air from the Sahara Desert swirled over the Mediterranean Sea, prompting authorities to issue extremely bad air quality warnings for Madrid and other cities.

The national air quality index listed the capital and large parts of the southeast coast as ‘extremely unfavourable’ — which is its worst rating.

Spain’s weather service AEMET described the dust storm from the Sahara as ‘extraordinary and very intense’, adding that it was unclear if it was the worst episode of its kind on record. AEMET forecasts that the dust will continue to accumulate through Wednesday and could even reach as far north as the Netherlands and northwest Germany. On Tuesday, it had also spilled over into Portugal.

The wave of hot air has also affected the air quality north of Madrid, as far west as the Canary Islands, and in the Balearic Islands.

Many people in Madrid, Murcia and Andalusia awoke to find a layer of red-orange dust covering their terraces, streets and cars on Tuesday. The sky in the capital and other cities had a gritty tinge, with visibility in Madrid and cities like Granada and León reduced to 4km, AEMET said.

Emergency authorities in the worst areas recommended that residents use face masks if they go outside and to avoid outdoor exercise. Face masks in Spain are no longer compulsory outside.

AEMET said the mass of hot air from Africa, which was brought in by a storm that delivered some much-needed rain for drought-hit Spain, also pushed temperatures in some areas up to 20 degrees. Also read: Climate change blamed as winter drought devastates crops in Spain.