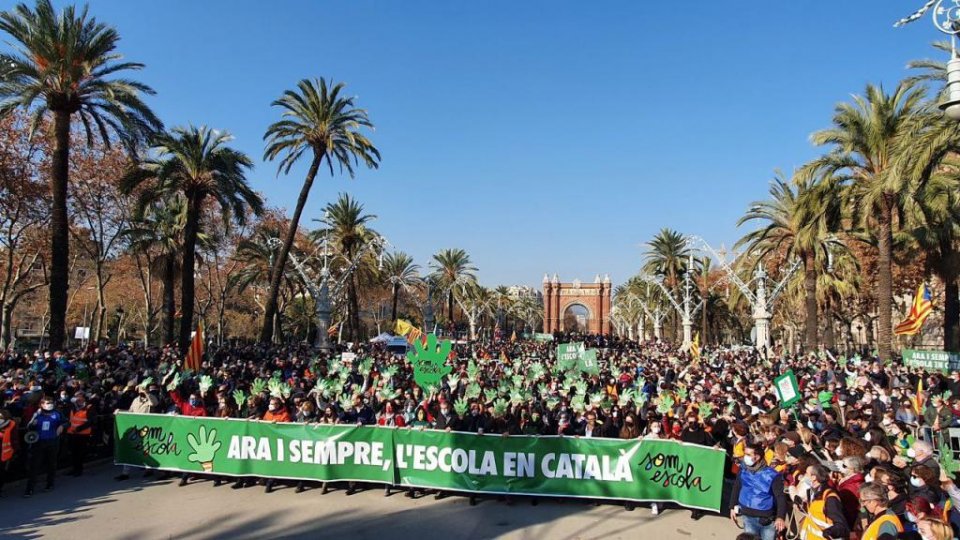 Thousands of Catalans took to the streets in and around Barcelona’s Passeig de Sant Joan on Saturday to defend the Catalan language immersion system in schools. It follows a recent court decision that mandates that 25% of all school subjects be taught in Spanish.

Barcelona’s local police, the Guàrdia Urbana, said that over 35,000 people attended the rally, following the call from Som Escola, which groups together most of the parent associations and teacher unions. Demonstrators chanted the motto ‘Ara i Sempre’ (now and always), referring to the need to use Catalan as a working language in schools across the country, in order to protect the minority language.

The march comes less than a month since the Supreme Court upheld the 2020 decision by a lower court in Catalonia that ruled in favour of a suit brought by Spain’s previous government led by the right-wing People’s Party (PP) against Catalonia’s Department of Education.

The Supreme Court threw out an appeal by the Catalan government against a previous ruling that the region’s schools must guarantee at least 25% of academic subjects are taught in Spanish. This translates into roughly doubling the hours students are taught in Spanish. Currently, most schools in Catalonia only use Spanish in Spanish language classes, leaving everything else to be taught in Catalan.

The increase may seem slight, but demonstrators claim this threatens their educational system, which has helped bring Catalan back to common use after it had been suppressed during the 20th-century dictatorship of Franco.

The use of Catalan in schools was official prohibited during Franco’s rule from the end of the 1936-39 Spanish Civil War until his death in 1975.

When Catalonia recovered its self-rule in the late 1970s, the new authorities decided that classes in Catalan, rather than a choice between Catalan and Spanish, would ensure that students end their studies speaking both languages – considering that the latter is learned in society because it is the most widely used one and is studied as a foreign language at school.

The Catalan education system is widely supported, even by many of the roughly 50% of citizens who are against the Catalan independence push. For many who came from other parts of Spain in large numbers last century, it meant their children could easily integrate, with the promotion of the Catalan language now seen as a prized achievement of Catalonia.

But some families who want their children to receive more learning in Spanish say the current system is violating their rights to study in the nation’s common tongue.

The use of languages in Catalonia’s schools has now also become a heated national debate after a family denounced that they had been insulted and felt threatened following their request for their child’s public school in Canet de Mar just north of Barcelona to increase the hours of Spanish as mandated by the courts.

‘We aren’t against Catalan. We love Catalan, and we appreciate the richness it gives us all as individuals and as a society,’ the family said in an open letter, written in Spanish and Catalan. ‘But we are bilingual, and we also love Spanish. Our goal is nothing more than for Spanish to form a part of our child’s education in a normal way just as it does in Catalan society.’

The Spanish Constitution states that Spanish is the language of the nation and should be learned and spoken by everyone. It also states that Catalan and other minority languages like Basque are co-official languages and part of Spain’s ‘cultural patrimony that should be subject to special respect and protection’.

The vast majority of Catalonia’s 7.7 million residents speak both Catalan and Spanish fluently. Conversations can easily flow from one language to the next, especially since many words are very similar.

The renewed defence of the Catalan language also looks set to stir up the region’s independence movement again, and which has recently been struggling to maintain its unity. Several marchers carried pro-independence flags at the weekend.

Meanwhile another institutional showdown looms between Spain’s central authorities and the Catalan government, which is run by pro-independence groups who are vowing not to abide by the requirement to increase Spanish in schools.

2021 and there is still a need for defending Catalan language in education.

Spain approves booster jabs against Covid for the over-40s