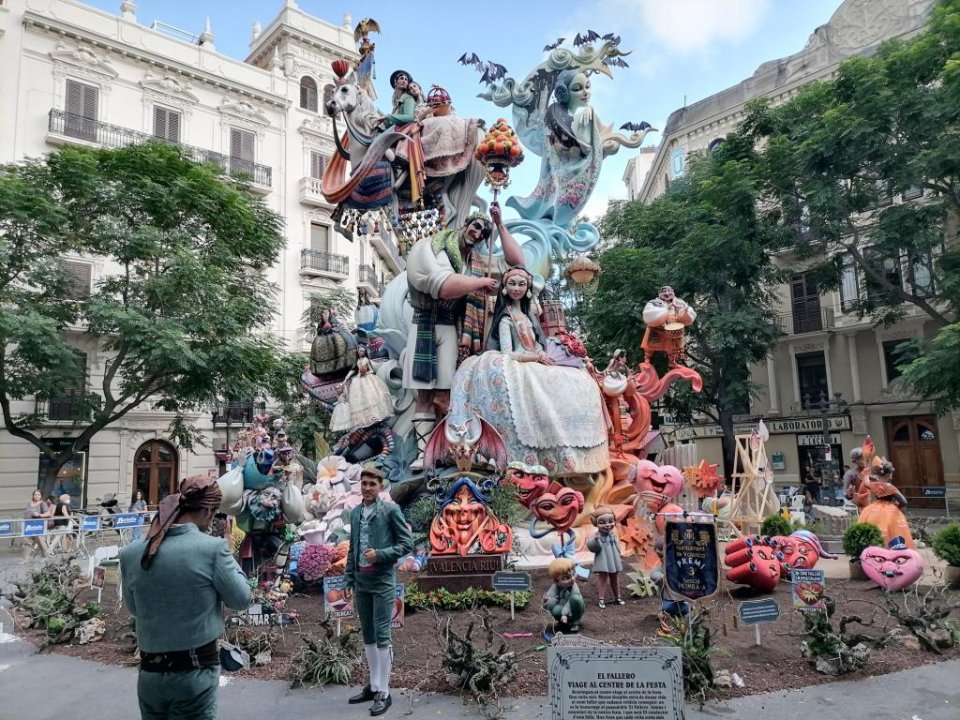 Rain had been forecast for late on Wednesday, but nothing on the scale that fell was predicted. September is generally a stormy month in Valencia and celebrating Las Fallas was always going to be risky. But the huge monuments have been in storage for nearly 18 months and need to be burnt to make way for the new ones already under way for next March’s celebrations.

Wednesday was the first day of the festivities in the city, La Plantà, when the monuments are finished, ready for the judges to start visiting them the following morning, and falleros gather to celebrate, with many organising dinners in their marquees put up close to the monuments. However, around 11pm on Wednesday, as fireworks were released in different parts of the city, the heavens opened, the wind got up and many of the newly installed fallas started faltering, many losing parts of their structures and in Catarroja the entire falla fell over.

At the Antiga Campanar falla their marquee was turned upside down and blew away along the street. A video of it has gone viral on social media.

Valencia mayor Joan Ribò changed his agenda to visit some of the fallas the morning after the storm. He tweeted messages of encouragement and a photo of the city council’s falla, the famous Meditodora, where the statue appears to be crying. He said: ‘The tears of the Meditator last night are the tears of everyone. But we falleros, like Valencians, don’t give up and we’ll continue to give our all to keep the flame alive, to keep the Fallas festival alive, the best festival in the world.’

Other towns were also hit by the storm, including Pedralba where the rainfall reached almost 100 litres in the hours just before and just after midnight.

Between 10pm and midnight on Wednesday, emergency services were called to 219 rain-related incidents, 201 of them in Valencia province. There were calls to cars blocked by water in Torrent, Paterna and Bétera, as well as Pedralba where there were people trapped inside their cars. ALSO READ: Cars swept to sea in flash floods after torrential rain and storms hit eastern Spain

Braving the afternoon heat, the most dedicated falleros took part in the first day of the Ofrenda on Friday afternoon and Saturday, walking through quiet, empty streets to reach La Plaza de la Virgen.

There were noticeably fewer falleros than normal. Some people are still away, enjoying the final days of the school holidays, while others, during the 18 months of the pandemic, have unenrolled from their falla. Although the main reason keeping people away was the heat. The layers of petticoats topped with a heavy printed fabric and a lined, fitted bodice is enough to make one faint even in the cooler March weather, but under the hot September sun it requires a certain dedication.

There were some tourists, but far from the numbers which usually line the narrow streets, applauding the falleros as they walk by, and the final part of the processions through the narrowest part of the old town were closed to visitors to avoid large crowds gathering.

Throughout the city the usual stands have been set up along the streets selling the traditional churros and buñuelos with chocolate, but frankly, an iced lemon slushy is far more appealing at the moment.

No need for a vaccine appointment

From Tuesday those who haven’t yet been vaccinated can turn up at any of the region’s 133 vaccination centres and get a jab without an appointment. The centres will be open until the end of September when the mass vaccination programme will be wound up. From then on, anyone wanting a vaccination will need to go to their local health centre.

The vaccination programme began last December, starting with the most vulnerable and has worked down through age groups. Speaking at the regional parliament on Friday, Valencia health minister Ana Barceló said that the aim was to have 70% of the population aged over 12 double-jabbed by 9 October but that 80% (aged over 12) were already fully inoculated, five weeks ahead of schedule.

Figures on Friday showed that 3,630,720 people in the Valencia region had been fully vaccinated, representing 71.8% of the total population, and 80.9% of the population aged over 12. ALSO READ: Covid-19 Vaccinations in Spain.

She also said that half of those over 12 would start the new school year having had both doses of their Coronavirus vaccine, and that within two weeks of the new term beginning all students over 12 would be fully protected.

She thanked those who had got the jab, praising their implication and exemplary behaviour and said that by going to vaccination centres they were not only protecting themselves from Covid-19 but protecting society as a whole. She asked the 52,154 people who had specifically rejected the offer of vaccination to rethink their decision, explaining that thanks to the vaccine the lethalness of the virus had been greatly reduced. She added that 82.5% of those in intensive care were not fully vaccinated and among other hospital admissions 57.8% had not received both jabs.

Barceló explained that the figures show we are heading out of the fifth wave and that the region once again has one of the lowest rates of Coronavirus infection, only behind Asturias and the Canary Islands.

However, she pointed out that nobody is safe form this virus, with 50% of those in UCI aged between 30 and 59, but that 14% are in their 20s and just 12% are over 70. She remembered the 7,683 Valencians who have died from Coronavirus during the pandemic, offering a message of support to families who have lost loved ones.