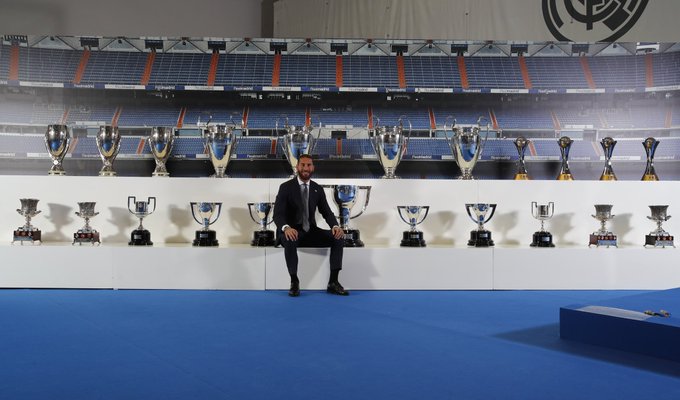 Sergio Ramos, long serving-captain and one of the Real Madrid’s most decorated players, has left the club after 671 appearances.

During his 16 years at the club, Ramos won the UEFA Champions League four times, La Liga five times and two Copa del Rey titles. All together this makes him a true part of Real Madrid’s history. At a Thursday press conference, Ramos gave an emotional speech where he elaborated on his cherished time in the club and the reason for not accepting a extension of his contract.

‘I came here as a child, and I leave with the greatness of the people who have always been with me,’ he said. ‘You are never ready to say goodbye to Real Madrid but the time has come. Nothing will ever be like what I have experienced here. I will always keep Real Madrid in my heart. This is a “see you later” because sooner or later I will return to Real Madrid.’

Hours after Real Madrid first announced that Ramos would be leaving, several rumours began spreading on social media saying that he had refused an extension of his contract due to a forced 10% pay cut. During a Q&A session with journalists after his press conference, Ramos said: ‘The club offered me a one-year extension with a salary reduction. I want to make clear that money was never the problem. It was the years, because I wanted stability for my family. I wanted two years and they [instead only] offered one.’

Ramos joined Real in 2005 for a then record-high transfer fee. The club were made to put up €27 million to sign the 19 year old from Sevilla. That sum had never before been paid for a defender in the history of Spanish football. The investment was, however, a prudent one as Ramos helped the club win over 22 titles during his tenure. Equally notable were 74 goals he scored in La Liga, making him the second-best scorer among defenders in the history of the Spanish league.

Where the 35-year-old ex-Madrid captain will continue his career is still to be decided. When asked about his future, Ramos said: ‘I have been able to talk to clubs since January, so there have been some clubs who were interested. But the plan was never to leave Real Madrid, meaning I haven’t thought much about this yet. Now, I will.’

I never thought this day would come, but everything has a beginning and an end. pic.twitter.com/B4IlwQ4pBJ