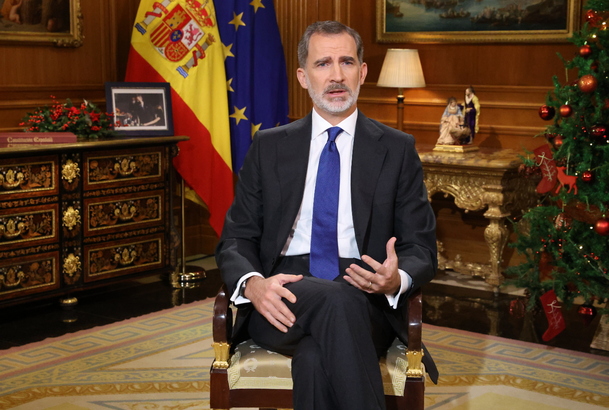 Spain’s King Felipe VI avoided any direct mention of the financial scandals surrounding his father and former king, Juan Carlos I, in his traditional Christmas speech televised on Thursday.

However, in what has been interpreted by some as a ‘veiled reference’ to the allegations against the former king – who left Spain in early August for the United Arab Emirates following on-going investigations concerning his finances and corruption scandals – Felipe VI did say that moral and ethical principles ‘are an obligation for everyone without exception’ and ‘are above all other considerations, including personal or family ones’.

‘In 2014, during my Proclamation to Parliament, I referred to the moral and ethical principles which citizens demand from us,’ he said during his speech. ‘Principles which all must follow, without exceptions, and which outweigh all other considerations, even personal or family ties.’

The rest of his speech focused mainly on the health, social, and financial effects of the Covid-19 crisis. Speaking of a ‘great national effort’ to overcome the effects of the health crisis, Felipe VI said, ‘We as a people do not give up,’ and maintained that Spain would get through the pandemic with great ‘effort, unity, and solidarity’.

Calling on all Spaniards to do their best to stop the spread of the virus, he thanked healthcare workers, the police, and the armed forces for their work during the pandemic, all the while acknowledging the ‘major concern’ that is the dire state of the economy at the moment.

The full text in English of Felipe VI’s speech can be read by clicking here.

In early December Juan Carlos I made a voluntary payment of €678,393.72 to the Spanish tax office, to avoid further action related to some of his financial affairs.

In November, Spain’s attorney general had instructed Supreme Court prosecutors to investigate a new case related to Juan Carlos, which had previously been handled by the anti-corruption office. The investigation concerned the use of credit cards linked to bank accounts allegedly not held under his own name, and with money coming from outside Spain. Juan Carlos was already under investigation by the Supreme Court for allegedly receiving commissions in exchange for interceding that a Spanish consortium won a contract to build a high-speed train link to the city of Mecca, in Saudi Arabia.

By making the payment to the tax office this month, Juan Carlos is likely to avoid any criminal case against him related to his finances after 2014, since the law provides that if a person regularises their situation before the tax office notifies the beginning of an investigation, they will avoid any court proceedings.