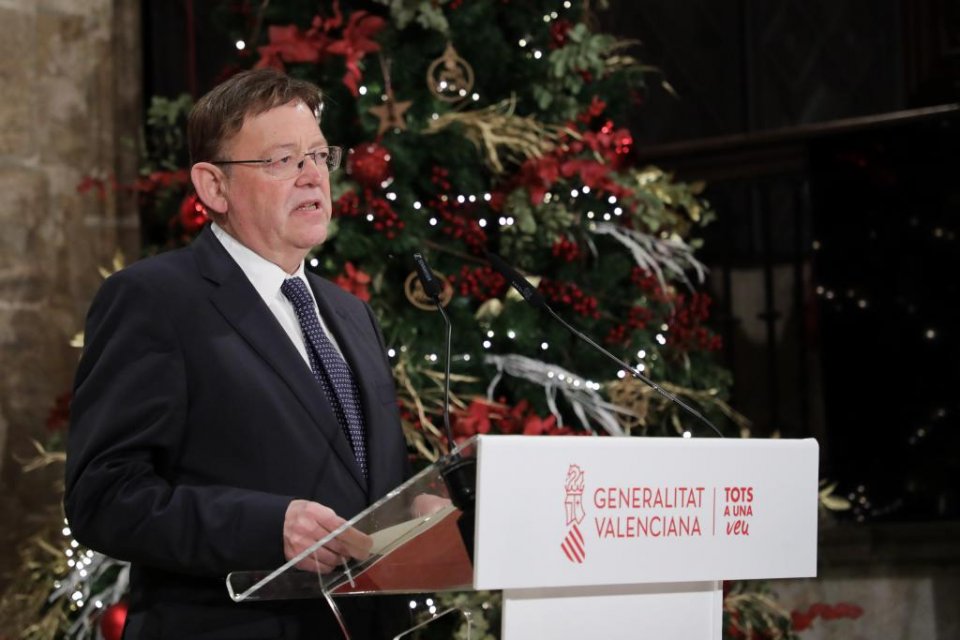 Valencia is among the first regions to bring in tighter restrictions over the Christmas period, limiting all social and family gatherings to a maximum of six people, without exception, reducing the curfew to 11pm, except Christmas Eve and New Year’s Eve, and strengthening the regional perimeter.

The new restrictions were announced just two days after the Valencia region recorded its highest ever number of daily Coronavirus infections, 2,841 on Tuesday.

Valencian president Ximo Puig announced the new measures on Thursday evening, following an hour-and-a-half long inter-departmental meeting. He appeared with Valencia health minister Ana Barceló, and said the new, exceptional rules were ‘to confront the health emergency and better protect the health of the population, with prudence, safety and responsibility.’

The measures include a maximum number of six people at any social or family gatherings, both in public and private locations, without exceptions, and those six people can only be from a maximum of two different family units.

Extensions to the curfew restrictions will limit movement between 11pm and 6am, except for the nights of 24 and 31 December, when the curfew will begin at midnight.

The perimeter restrictions remain unchanged, and entering or leaving the region is not allowed except for certain exceptional circumstances like returning to one’s permanent residence, caring for a dependent family member, official exams, going to a place of work, health centres or reasons of force majeure.

The new tougher restrictions will come into force on Monday 21 December and will be in place until 15 January.

Puig justified the new measures, saying that the latest figures forced the government to act. The past week has seen a 27% rise in infection rates and more than 2,000 new cases reported for four consecutive days. He said that the aim of these new restrictions is to limit social contact and ‘flatten the curve of infections which, as in the rest of Europe, is also spiking in our region’.

He added: ‘The speed with which infections are increasing, with winter on the doorstep, is worrying across Europe, in Spain and also in the Valencia region. For this reason, and given the proximity of the festive period, taking these decisions is inevitable.’

‘We mustn’t confuse our priorities, because we’re not playing with Christmas, but with the lives, the jobs and the futures of many Valencians. Now, with the vaccine so close, when we are in the final phase of the pandemic, when we have suffered so much to get this far with the help of science and so many people, we cannot now fail.’

‘We don’t like to create uncertainty or to have to change measures announced just 12 days ago, but the situation changes and we have to adapt to fight it better,’ he added.

Puig also said that controls would be intensified to check limits on capacity, in places like restaurants, but also called on individuals to be responsible because breaking the rules could seriously harm others in their health, work and wellbeing. He ended by saying that the region was ready for the arrival, storage, distribution and administration of 600,000 doses of the Pfizer vaccine.

Spain has the weakest Covid-19 restrictions in Western Europe. Please publish a chart showing all countries restrictions which will bear me out. At this rate Spain will be last to return to normal, with no limitations.
Thanks, James in Valencia

I have received a 500€ tax demand from Valencian Agencia Tributaria for some 4 years ago – 2016. As an ex-pat, I have always paid income tax using a fiscal representative. As my pension is paid in sterling, she always uses the official exchange rate avertised by Tributaria (Bank of Spain) when calculating the exchange rate. Now I am told that some four years later, the Tributaria have moved the goal posts and decided upon a new exchange rate retrospectively in order to extract more cash out of ex-pats! They have calculated the difference on the official exchange rate in 2016 on my income, hence the new demand. Is this even legal? – it sickens me how they treat ex-pats who bring income into the country and to be treated like this – I think most people would agree this could be called institutional theft! I am wondering if any other of your expat readers have received such demands? My solicitor informs me three other clients have in his practice! Shame on you Valencia

Can we go from Valencia to bilbou to pick up 2 members of family who are being made homeless can we drive and bring them back to Valencia during the restrictions we are really worried and want to pick them up to be safe what can we do and who to ask for permission ? Anyone please help any advise would be appreciated