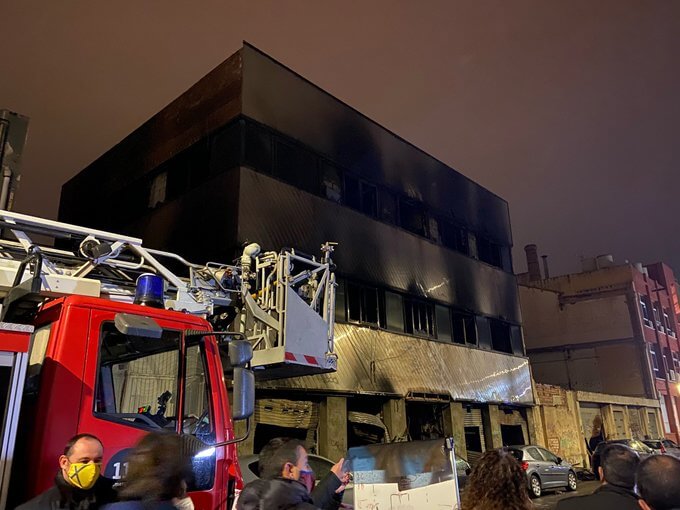 #UPDATE on Mon 14 Dec – A fourth body has been found by firefighters and rescue workers on Monday, following the fire in Badalona warehouse last week.

At least three people have died and 17 injured after a blaze ripped through an abandoned industrial unit in the Gorg district of Badalona on Wednesday evening, just north of Barcelona. The building was occupied by squatters and vulnerable people, according to local authorities.

Emergency services said the blaze started late on Wednesday and was under control by Thursday morning. Firefighters had not yet been able to enter the building on Thursday morning, however, and the investigation to identify the origin of the fire could last days. Authorities also said that parts of the building had collapsed and that there was a risk the whole structure could fall, which would further complicate rescue efforts.

Just before midnight, 17 people had been reported injured, with two of them in critical condition, four in serious condition and 11 with mild symptoms. It was not clear how many people were in the warehouse when the blaze started, but local authorities said it had been a squat for at least ten years and that many vulnerable people often slept there.

Many people who were sleeping there managed to escape, the Catalan interim president Pere Aragonès told broadcaster TVE.

‘We don’t know exactly how many people there were at the time of the fire,’ Aragonès added. ‘We’ll need to see if there could be someone who remains trapped inside.’

Miquel Sàmper, in charge of interior affairs in the regional Catalan government, said that the origin of the fire was not known yet. He said that 28 firefighting units were taking part in the operation.

Spanish state takes over Franco’s ‘summer mansion’ from his heirs