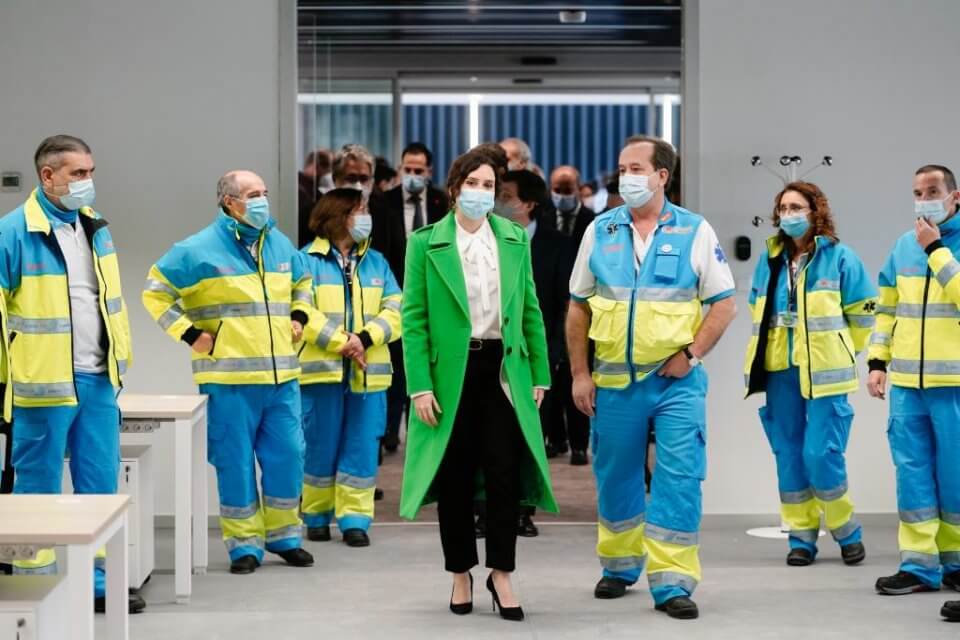 The Madrid region has inaugurated a brand new hospital, built in just three months and with the capacity to eventually treat more than 1,000 patients during an emergency. The project has not been without controversy, however, and around 200 people protested outside during the opening ceremony on Tuesday.

Isabel Zendal hospital near Barajas airport covers 80,000 square metres and cost nearly €100 million, with the main purpose to ease pressure on other hospitals across the Madrid region, one of the worst hit in Spain during the Coronavirus (Covid-19) crisis.

At the inauguration on Tuesday, the president of the Madrid regional government, Isabel Díaz Ayuso of the right-wing People’s Party (PP), said that the hospital was ‘unprecedented in Europe’.

‘It is an authentic healthcare lung, an oxygen pump for the professionals of the Madrid Health Service [SERMAS] and the rest of Spain,’ said Ayuso, stressing that it was also a unique hospital ‘worldwide’.

Ayuso said that the new hospital would enable Spain’s ‘National Health System as a whole to prosper … because we want it to be a hospital for Spain, open to the rest of the autonomous communities.’

‘It is a reminder that when Madrid sets a goal and works with conviction for it, it can overcome the most difficult goals,’ said Ayuso, adding that it is also ‘proof of the serious and rigorous way that Madrid faces problems … always presided over by the same will to move forward and to build a better region.’

Set to open fully in various stages, Ayuso also said that the hospital ‘is adapted to suit any situation we might go through’, indicating that its intensive care unit would be ‘the most advanced in Madrid.’

At the gates during the inauguration, however, about 200 members of the ‘Association for the Defence of Public Health of Madrid’ protested against the project, claiming that it would have been less expensive and faster to recover unused beds in other hospitals across the region. They have criticised the project as being ‘useless’ and which came in at twice the cost of its initial budget.

Isabel Zendal hospital is starting out with just 116 health professionals, all of them volunteers. Wires could be seen dangling from the ceiling of the still-empty complex on Tuesday, with the first patients expected to arrive next week. It has not yet been announced when more staff will be recruited.

‘A public hospital can’t be bad news for anyone, except for those with a political agenda,’ said Ayuso, pointedly referring to the absence at the inauguration of Salvador Illa, the health minister in Spain’s coalition government of the PSOE socialist party and the left-wing Podemos group.