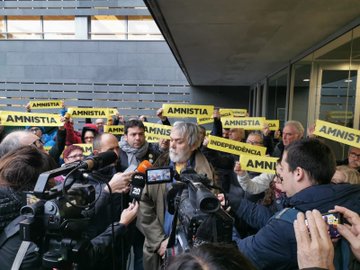 A judge at the local court in Manresa (Barcelona) has refused to release the jailed Catalan independence leader Oriol Junqueras, after the politician’s family filed a petition on Friday for ‘habeas corpus’ to request his ‘immediate release’.

The family had filed the petition in Manresa as it is the court nearest to the prison where Junqueras is held.

The petition, signed by Artur Junqueras and Neus Bramona, claimed that the Esquerra Republicana (ERC) party leader should be released immediately to appear before a judge on duty, arguing that he is the victim of ‘arbitrary detention’.

The petition from the family of Junqueras followed a day after the Spanish Supreme Court refused his release to take up his accreditation as an MEP.

The Court of Justice of the European Union (CJEU) ruled last month that the Catalan pro-independence leader should have been granted immunity from June 2019, when the EU Parliament election results were declared and he was elected as an MEP.

ALSO READ: Oriol Junqueras: ‘I consider myself a political prisoner’

The Luxembourg judges ruled that since he had immunity, he should have been released in June in order to take up his seat, but which was denied at the time by Spain’s Supreme Court.

The Spanish court again rejected his release on Thursday and denied his immunity, arguing that it is no longer applicable as he has already been convicted and disqualified from public office.

On Thursday, after the Supreme Court delivered its ruling, Oriol Junqueras’ colleague from the ERC party and the current Catalan vice president, Pere Aragonès, called the court’s decision ‘shameful’, a ‘scandal’, and that Spain’s judiciary ‘once again has infringed the rights of Junqueras and thousands of citizens who voted for him.’

The ERC party issued a statement on social media accusing the Spanish judiciary of ‘again disobeying international rulings’ and ‘impeding citizens from being represented,’ ending with a defiant vow to ‘overturn the injustice.’

ERC said it would appeal the decision and take legal action against the Supreme Court ruling, and it called on the European Parliament to ‘protect’ Junqueras and to verify his credentials.