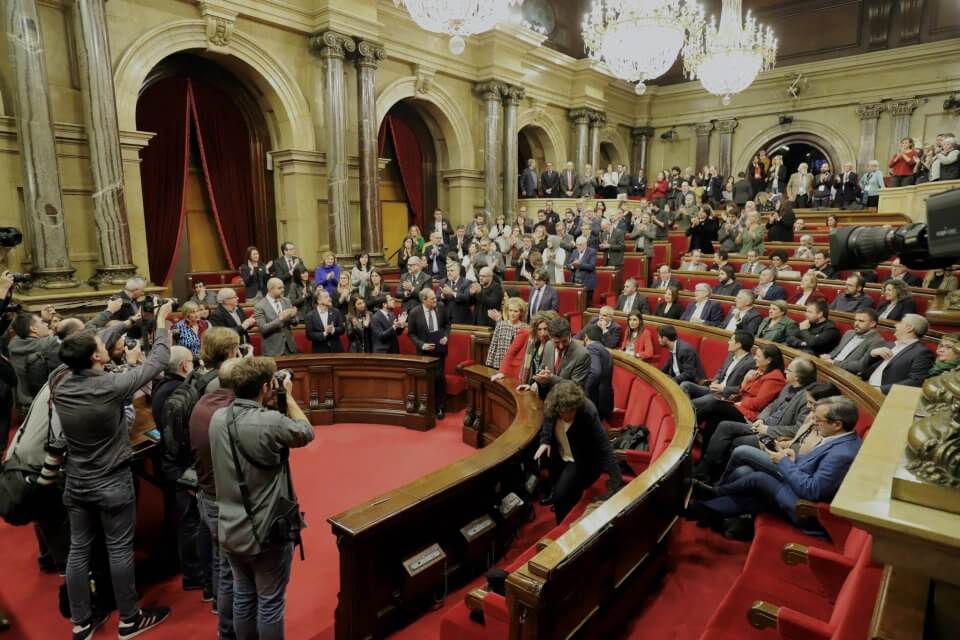 Catalan president Quim Torra appeared before an extraordinary plenary session of the Catalan Parliament at his own request on Saturday afternoon, only a day after Spain’s Electoral Authority (JEC) disqualified him from office.

Torra called upon the Catalan MPs to ‘defend the democratic will and sovereignty of Parliament’ in response to the Electoral Authority’s ruling, which he said was aimed at ‘bringing down a president through irregular procedures’ in ‘another attempt to alter what has been decided by the Catalan people, another blow to democracy, and another coup against our institutions’.

At the start of his speech, Torra said, ‘If this chamber does not accept my ousting, I will continue as president. If it does, I won’t oppose.’

Torra said he would not ‘give up any right of defence’ and that his lawyers would lodge ‘as many appeals as it takes to put an end to this legal and political aberration. Their threats and persecution won’t stop us.’

MPs from the three pro-independence parties – Junts per Catalunya (JxCat), Esquerra Republicana (ERC) and CUP voted in favour of a motion reading: ‘The Catalan parliament rejects the resolution of the electoral board.’

The motion also qualified the electoral board’s decision as a ‘coup d’état’ and accuses Spain of launching a ‘general cause against the independence camp’.

The pro-independence parties also called for ‘the end of repression, the recognition of the right to self-determination for Catalonia, amnesty for the prisoners and free return of exiles.’

The motion backed jailed leader Oriol Junqueras‘ right to be MEP – after the electoral authority also ruled to not grant the jailed former Catalan vice president his MEP seat, despite the ruling on 19 December by the Court of Justice of the European Union (CJEU) in Luxembourg that Junqueras had immunity after being elected as an MEP on 26 May.

The Catalunya en Comú group presented a separate motion saying the electoral board has gone too far in their powers.

The Catalan Socialists (PSC) put forward another motion saying Torra’s disqualification was not final and was subject to appeals, which was unsuccessful.

Whilst the Ciudadanos (Cs) and the People’s Party (PP) did not present any motion, they had previously welcomed the electoral board’s decision, which arose from their own legal initiatives.

Pedro Sánchez has to wait until second round vote on Tuesday