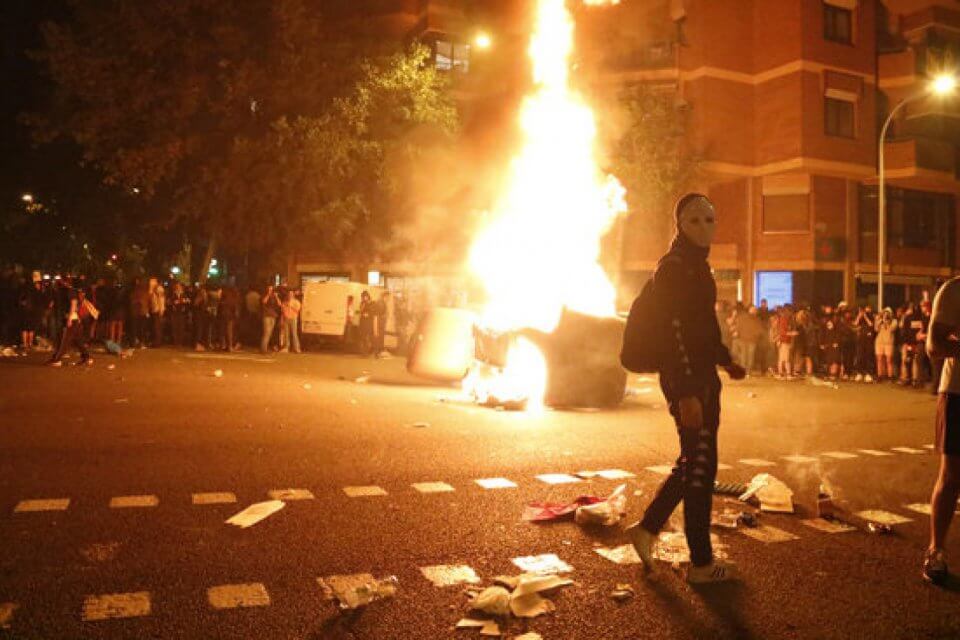 Spain’s acting prime minister Pedro Sánchez has stressed that his government ‘will not accept violence taking over’ Catalonia as the streets of Barcelona entered a new night of unrest on Wednesday.

Sánchez also urged Catalan president Quim Torra and his ministers to ‘condemn violence without excuses’, and warned against ‘organised groups’ carrying out vandalism in recent days.

Earlier on Wednesday Quim Torra himself was in the northern Girona region of Catalonia to take part in the first day of the Marches for Freedom protests organised by civil pro-independence groups, and he said he was ‘very proud of the civic spirit’ he had encountered there.

The protest involves five separate marches that left from five different Catalan cities on Wednesday, which will cover various stages and will be timed to arrive in Barcelona on Friday for a major demonstration against the sentences.

‘The violence does not represent us and never will,’ said Torra, in reference to the ‘Catalan pro-independence movement’, and following the unrest seen on Tuesday night in a number of Catalan cities.

Yet, the president made no specific reference to Tuesday’s unrest nor did he mention the role of the Catalan police or explicitly distance his government from the disturbances, as Spain’s acting interior minister, Fernando Grande Marlaska, had appealed for him to do earlier in the day.

Barcelona was just one city where demonstrators set up barricades in the streets that they set on fire while clashing with both Spanish and Catalan police in protest over the prison sentences handed down to nine Catalan leaders for the 2017 independence bid.

Torra’s presence at the march in Girona drew criticism from Barcelona mayor, Ada Colau, who insisted that ‘the Catalan president’s place is to give explanations so as to reassure the public and put forward specific proposals for a way out of the stalemate’.

The mayor’s comments came after Torra left an urgent meeting of ministers he had called earlier in the day to discuss the unrest, leaving Catalan vice president Pere Aragonès, presidency minister Meritxell Budó, and interior minister Miquel Buch to continue the discussion.

After the meeting, vice president Aragonès called for ‘calmness and responsibility’ from everyone on Wednesday, the day after the turmoil in Barcelona city centre.

Meanwhile, Carlos Lesmes, the president of the General Council of the Judiciary and of the Supreme Court, warned Torra that he was ‘responsible for the limits that must not be surpassed’ in terms of the protests against the Supreme Court verdict.

Lesmes told the press on Wednesday that, whilst criticising and protesting against the Catalan Trial verdict was ‘legitimate’, he also argued that ‘everything that surpasses the limit of the right to criticise or to protest warrants a reprimand’, especially ‘if they come from or are instigated by a public official’.

This warning comes after Spain’s Constitutional Court suspended the Catalan parliament resolution defending self-determination and reminded chamber bureau members and the government of the possibility of ‘criminal responsibilities’ if they persisted.

Also on Wednesday, Catalan interior minister Miquel Buch defended the action of the Catalan Mossos d’Esquadra police force, which was involved in charges against pro-independence protestors, and said he would not step down for their actions.

‘Police cordons should not be broken nor should street furniture be destroyed or blunt objects thrown at police or at protestors. These are acts of senseless violence that do not represent [us],’ Buch argued.

As for the agitators that have been behind post-protest clashes, the minister said they should be ‘isolated’.

Meanwhile on Wednesday night pro-independence supporters took to the streets for the third day in a row to protest the sentencing of 9 leaders for the crime of sedition. Barcelona’s Marina street was flooded with thousands of demonstrators in the evening amid a heavy presence of police officers.

Imprisoned independence leaders and the Catalan government urged protesters to remain peaceful on Wednesday after demonstrations descended into scenes of unrest the previous night, with police and protestors clashing amongst barricades that had been set on fire.

The protest on Wednesday night was not only called to reject the recent Supreme Court verdict, but also to condemn police charges, which left over a hundred people injured the previous night. The headquarters of the Catalan interior ministry and the Spanish police were heavily guarded.

The Spanish government will deploy more police officers in Catalonia over the weekend ‘to guarantee security’, according to sources in the interior ministry.

Earlier in the month, at least 500 National Police and Guardia Civil officers were moved to Catalonia in preparation for the protests expected following the Supreme Court’s verdict on the Catalan leaders prosecuted over the 2017 independence bid.

Many of those officers were involved in policing the large protest on Monday that brought Barcelona airport to a standstill, and episodes of unrest on Tuesday night that saw unruly protestors build barricades in the streets of a number of Catalan cities.

Initially, the deployment of extra police officers is due to last until 1 November although Pedro Sánchez has said that he ‘does not rule out any scenario’ and if necessary will act ‘with firmness‘ in Catalonia.

Click here for all articles and updates on the Catalan Trial, the verdicts and sentences

Gibraltar begins a return to normality – without face masks outside