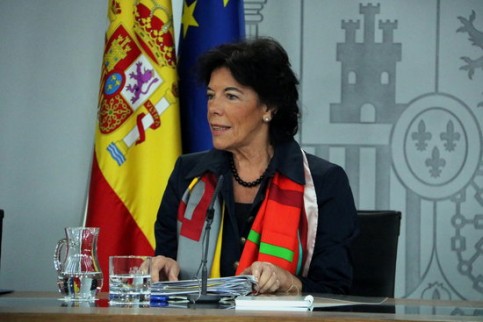 Spain is to challenge the motions passed by the Catalan parliament on Thursday seeking self-determination, amnesty and the removal of the Guardia Civil from Catalonia.

The cabinet in Madrid agreed to ask its highest advisory council for a report on the legality of the motions and is likely to take them to court.

‘They are an attack on co-existence among Catalans,’ said Spain’s government spokesperson Isabel Celaá on Friday after informing the press of the ministers’ agreement. ‘This government will not accept any attack on Catalonia’s [self-rule] statute or the constitution,’ she added, urging ‘co-existence, respect and dialogue within the legal framework.’

Celaá also referred to the Catalan president Quim Torra‘s accusations that Spain was ‘criminalising the independence movement’ after Monday’s arrest of seven activists, which lead to their precautionary imprisonment without bail on terrorism charges.

‘The [Spanish] government flatly rejects Mr. Torra’s accusations,’ she said. ‘We ask him to make clear his respect to the democratic laws, the principles of the rule of law and the separation of powers.’

Seeking an amnesty and exercising the right to self-determination were the responses to the upcoming potential guilty verdict for the leaders behind the 2017 independence referendum that the Catalan parliament decided on with a motion.

On Thursday, the Catalan pro-independence majority of lawmakers also passed another motion accepting ‘the legitimacy of civil and institutional disobedience as a means to defend the civil, political and social rights that may be violated.’

The same MPs also passed a third motion requesting that the Spanish Guardia Civil police, in charge of Monday’s arrests leading, be removed from Catalonia.