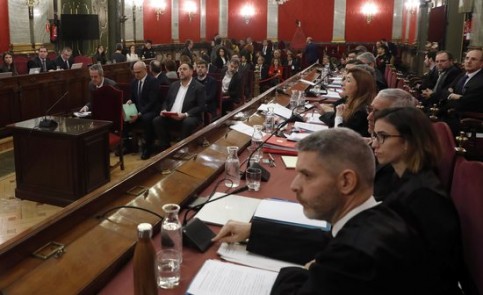 Spain’s public prosecutor is requesting prison sentences totalling 177 years for the 12 Catalan pro-independence politicians and activists in the dock at the Supreme Court, accusing most of them of rebellion, misuse of public funds, and disobedience.

On Tuesday, four members from the prosecutor’s office gave their justifications for charging the defendants with rebellion, an offence that has only been enacted once in recent history, against some army officials who attempted a failed coup d’état in 1981.

What are the arguments they used? And how might the defence teams try to refute them on 11 June when they give their closing arguments?

The public attorneys branded the 2017 independence push ‘a coup d’état’ and an ‘uprising’, claiming that the aim of the movement was to ‘revoke, suspend or modify the Spanish Constitution’.

One of them even said that on 27 October 2017, the day the Catalan Parliament declared independence, Spain’s legal framework was in effect revoked and replaced by another.

Although the prosecution disregarded the fact that the declaration was never published in Catalonia’s official gazette, this is something the defence teams are very likely to emphasise – the text of the declaration never came into force and the cabinet did not take any measures to execute independence as provided in the legal text. They claim the move was symbolic.

‘Attacks against Constitution’ versus ‘civil disobedience’

During the prosecutors’ speeches, the main issue revolved around the alleged serious attacks on the Spanish Constitution.

Indeed they mentioned the several warnings issued by Spain’s Constitutional Court ahead of the events in autumn 2017 to former ministers and the former parliament speaker [Carme Forcadell], which they allege were ignored.

This means it cannot be ruled out that some defence lawyers implicitly accept the disobedience charges – some defendants mentioned the concept of ‘civil disobedience’ as an argument.

However, under Spanish law, disobedience offences carry no prison sentences.

Spain’s criminal code rules that rebellion charges need to include accusations of violence.

The public prosecutors used the witness testimony from dozens of Spanish police officers to argue that 2017 referendum voters weren’t peaceful. And they also tried to prove that the officials in the dock were behind this alleged violence.

For instance, they mentioned visits by some politicians to the polling stations to support the voters staying overnight in the hours ahead of the vote, or the fact that activists Jordi Cuixart and Jordi Sànchez stood on a police vehicle during a key protest in September 2017.

Yet the defence teams might allege that both activists were standing there in order to call off the protest – and to call for peaceful conduct during the demo.

In fact, both politicians and activists insisted at all times during the independence push that all protests had to be non-violent, and they also called for ‘peaceful resistance’ during the referendum.

This, and the violent conduct displayed by the Spanish police, which has been called ‘disproportionate’, will be among the arguments the defence will use to refute the allegations.

Junqueras: ‘main driver of rebellion’ versus ‘defender of dialogue’

One of the key figures in the proceedings is Oriol Junqueras, the former Catalan vice president and the highest-ranking official being tried, in the absence of former Catalan president Carles Puigdemont.

The public prosecutor claimed that ‘Junqueras was the main driver of the rebellion.’

They also accused him of ‘cynicism’ for having regretted the lack of dialogue with the Madrid government before the referendum, something he emphasised in his cross-examination during the trial.

Yet taking into account that the top Catalan officials insisted on dialogue until the last moment before the declaration of independence, with no response to their offers from Madrid, might be another argument the defence will use next week.

‘Misuse of funds’ versus ‘no public money spent on referendum’

The prosecutors conclude that the Catalan government embezzled three million euros to pay for the referendum and this, they say, makes the rebellion charges against nine of the 12 leaders more serious.

Yet no public servant or government official in 2017, or businessperson linked to the referendum, acknowledged spending or receiving public money during the preparations for the vote, something that is also likely to be brought up by the defence.

The attorneys stated that the number of witnesses and experts taking the stand during the proceedings show that this has been a fair trial.

They also denied the suggestion that the nine politicians and activists in preventive detention are political prisoners, and disregarded the recent call by the UN Working Group on Arbitrary Detention to release three leaders.

After the prosecutors’ remarks, some defence lawyers talked to the press, calling the speeches ‘political’, suggesting that this confirms their claims that it is a political trial.

They also said the prosecutors’ closing arguments showed ‘a poor legal basis and a poor basis of evidence.’

Miley Cyrus grabbed and forcibly kissed by fan in Barcelona