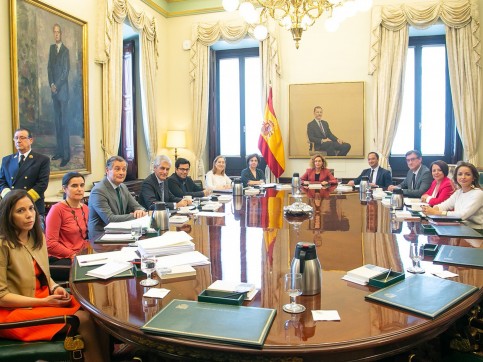 The four jailed Catalan pro-independence leaders who became Spanish MPs following the 28 April General Election have been suspended over rebellion accusations that have resulted in their prosecution and preventative imprisonment.

Spain’s congress committee agreed the ruling on Friday afternoon, with left-wing Unidas Podemos the only party voting against it due to reservations over the ‘rush’ in which the decision was taken.

The chamber speaker, Socialist Meritxell Batet, defended the action on the basis that the body was following the advice of the parliamentary lawyers, who presented a report on the issue on Friday morning.

Oriol Junqueras, Jordi Turull, Josep Rull and Jordi Sànchez took their seats on Tuesday. Raül Romeva, who became a senator the same day, is not affected by this particular decision by the lower chamber.

The representatives were barred from sitting in the Catalan Parliament last July, after the Supreme Court ruled that an individual on trial for rebellion or terrorism and in preventive prison can temporarily be suspended until a verdict is reached.

Batet, initially requested the Supreme Court to also rule on their current status, but the court said it ‘can only reiterate’ its previous judgment and that settling the matter rests with the chamber.

After a committee meeting on Thursday, Batet said that the parliamentary body had sought advice from the chamber’s legal experts, who produced a report on Friday morning in favour of suspending the representatives based on the court’s original ruling.

Theresa May to step down as PM on 7 June

Messi: ‘We want to win one more title.’ Preview of Copa del Rey