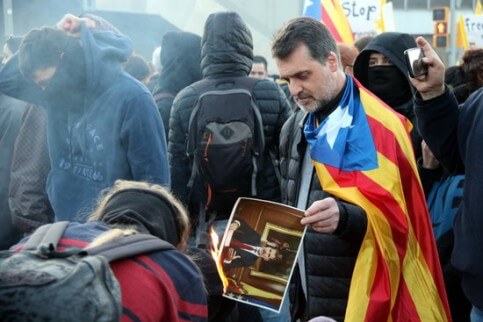 Hundreds took to the streets in Barcelona late on Sunday to protest against the visit of Spain’s king, Felipe VI, who was inaugurating the Mobile World Congress (MWC), the world’s largest trade fair for the mobile industry.

While the protest started in front of the Museu Nacional d’Art de Catalunya (MNAC), where the king and other authorities attended the MWC’s inaugural dinner, demonstrators eventually moved to Plaça Espanya, where they blocked traffic in one of the city’s most crowded roundabouts.

Felipe’s most recent visits to Catalonia have sparked protests, with many criticising him for his TV speech on 3 October 2017, where he took on Catalan officials for holding an independence referendum deemed as illegal but made no mention to police violence against voters.

A recent survey by the Center of Opinion Studies (CEO) found that almost 80% of Catalans disapprove of King Felipe. On a scale of 10, some 60% of those surveyed gave him a 0.