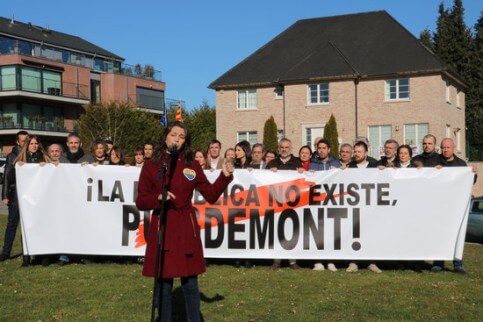 Inés Arrimadas, the leader of the Ciudadanos (Cs) party in Catalonia (Ciutadans), has travelled to Waterloo, Belgium, to hold a protest in front of the house of Carles Puigdemont, the former Catalan president who went into exile after declaring independence from Spain.

Puigdemont currently presides the Council for the Republic, a private organisation aimed at working for Catalan independence, and refers to his place of residence as the ‘House of the Republic’.

The leader of the Catalan Cs posed along with other party officials holding a sign which read ‘The Republic doesn’t exist, Puigdemont!’

Puigdemont took on Arrimadas for rejecting to meet with him: ‘Arrimadas comes to Waterloo to make a scene with a very small group of followers but doesn’t have the courage to enter and come talk with me. They do all this and then escape after some minutes. No surprises: Cs came to politics to be and act like this.’

Arrimadas to stand in elections for Spanish Congress

On Saturday, Inés Arrimadas also announced her bid to run in the Spanish general on 28 April election as number two for Cs leader Albert Rivera.

‘I have the great responsibility of defending Catalan constitutionalists [against independence] and this will only be possible if Albert Rivera is the next president of the Spanish government,’ she said at a rally in Madrid on Saturday.

Arrimadas is one of the most prominent detractors of the independence movement, and led Cs to become the most voted party in the last Catalan election, in 2017.

With the party’s spokesman in the Spanish Congress, Juan Carlos Girauta, standing in Toledo in the upcoming election, Arrimadas will run in the primaries to lead the Cs list for Barcelona and stand as the number two candidate behind Rivera, the party’s leader in Spain.