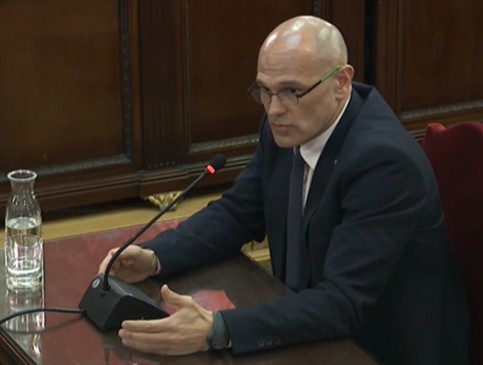 Former Catalan minister, Jordi Turull, argued in Spain’s Supreme Court today, the fourth day of the Catalan trial, that the government followed the wishes of the public in organising a referendum on independence in 2017.

‘Catalans are not sheep,’ Turull told the prosecutor, adding: ‘We weren’t looking to involve people [in the independence bid], that already existed, and so a political solution had to be provided.’

As former presidency minister and cabinet spokesman, Turull was one of the highest-ranking government officials during the 2017 independence referendum, which the Spanish authorities declared illegal.

Having so far spent 366 days in preventive detention, Turull is charged with rebellion and misuse of public funds, and faces a hefty prison sentence.

Responding to prosecutors’ questions, Turull maintained that pushing for independence was not against the law: ‘The Together for Yes candidacy was for independence. Everyone knew it. It’s not abnormal to try to peacefully and democratically deliver on what you pledged to Catalans.’

Turull pledged that the Catalan government ‘tried for an agreed referendum [with Spain] until the last minute.’

Turull also said his department did not order any posters promoting the referendum. Over a year after the vote, he said he still does not know how the ballot boxes were purchased for the vote.

‘I don’t know how the referendum ballot boxes were bought and how they ended up in the polling stations,’ said the former minister responding to the public prosecutor.

Accused of breaching the law by organising the vote despite Spain’s opposition, the former minister said that the central government in Madrid contravenes Constitutional Court rulings ‘every day’.

‘Presenting yourself as constitutionalist allows you to bypass the Constitution whenever you want. As a pro-independence supporter, I’ve spent a year in prison for not complying with a ruling,’ said Turull.

Elected as an MP for the Junts per Catalunya (JxCat) party, Turull was put forward by the exiled former president Carles Puigdemont to become his successor, after Spanish courts ruled out his retaking the post at a distance.

Turull returned to prison on 23 March, a day before he was to be sworn in as Catalan president in the Parliament.

He was subsequently suspended as an MP, and prevented from retaking his post as presidency minister while in prison.

Raül Romeva also started his testimony this afternoon in Spain’s Supreme Court in Madrid, as a defendant in the Catalan independence trial, asserting: ‘There is no international treaty prohibiting the right to self-determination. Not even the Spanish Constitution.’

Romeva was the foreign minister in Puigdemont’s cabinet during the October 2017 referendum and declaration of independence, and he has been in pre-trial prison for almost exactly a year.

In the same way as Oriol Junqueras, Romeva described himself as a ‘political prisoner’ in his first remarks, and he refused to answer questions put forth by the public prosecutor, the solicitor general and the private prosecutor, the far-right Vox party, on the grounds that the trial is ‘political’.

‘In the 20th and 21st centuries there have been 106 self-determination referendums, 54 since 1991, and 26 without state consent,’ said Romeva in his testimony, also saying that throughout history ‘more has been achieved’ by peaceful means that through violence, which is ‘not an intelligent’ way to go, he added.

‘Defending the non-violent way is not only a matter of ideology, but a matter of pragmatism,’ said the jailed official, adding, ‘I’m sure it’s more likely that I’ll achieve my political goals if I pursue them through peaceful means.’

Romeva also said that ‘there were as many as 20 attempts to ask for dialogue with Spain.’

‘Everything we used to do was public – and we used to explain why we were doing it this way,’ he recalled. ‘There was no other solution, as on the other side,’ he said, referring to the Spanish government, ‘we were only met with empty chairs and closed doors.’

The former foreign minister further stated that while in office he used to defend self-determination in his meetings with foreign officials ‘because it was on the agenda’ but denies that this was a crime.

‘We did call on people to take part in a referendum. But we also said we would respect any outcome of the vote,’ said Romeva in his testimony.

He concluded: ‘We’re here today because those who should have been doing politics in their time, didn’t. They’ve passed the problem on to you.’