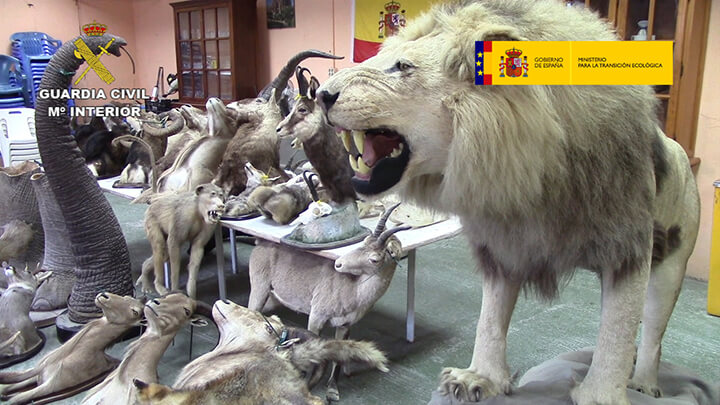 Spain’s Guardia Civil police have seized more than 200 stuffed endangered animals, including giraffes, rhinos, lions and tigers, from an illegal taxidermy workshop that was selling them online.

Officers found the stuffed animals at a warehouse in an industrial area of Alicante, a city on Spain’s Mediterranean coast. They seized others in the nearby city of Monovar, at the home of a man suspected of working as a taxidermist without a licence, police said in a statement.

Police placed six people under investigation after the seizing the haul, who could face charges of trafficking in endangered species.

The animals seized included ‘more than 200 specimens of various species’ on the United Nation’s Convention on International Trade in Endangered Species (CITES).

‘The species that were seized included, among many others, African lions, white rhinos, Bengal tigers, African crocodiles, African antelope and giraffes,’ the statement said.

Police began their investigation in May after finding online ads offering the stuffed animals for sale.

CITES is a global treaty signed by over 180 countries that regulates trade in wild flora and fauna or products derived from them with an aim to ensuring their survival.