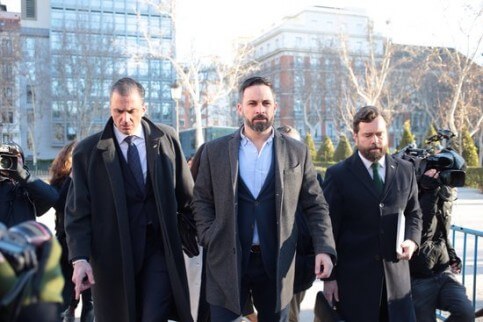 The head of the far-right Vox party, Santiago Abascal, says that the fact that the Catalan president, Quim Torra, is in the courtroom during the trial of Catalan leaders shows that the pro-independence ‘coup d’état is alive’.

Abascal’s party, along with the right-wing People’s Party (PP) and Ciudadanos (Cs), consider the October 2017 referendum and declaration of independence that followed to be a coup d’état.

Vox is the private prosecutor in the independence case in the Supreme Court, and it requests a joint sentence of 702 years behind bars for the leaders on trial –up to 74 years each.

On Tuesday, when the court case began, Abascal called for a ‘fair trial, without impunity and without pardons.’ For the Vox head, in Spain ‘politicians have failed, and courts, prosecutors and the crown have worked.’

Meanwhile, Vox official Iván Espinosa said that this was ‘the most important trial [in] Spain since the inception of democracy, since the constitution of 1978.’

Espinosa further deemed what was being tried as ‘some of the most heinous crimes that could ever be committed against the constitution, probably the most serious crimes you can commit in Spain without bloodshed.’

Meanwhile, the People’s Party (PP), which was in power in Spain during the 2017 independence bid, thinks the trial will show that ‘no one is above the Constitution’.

The party’s secretary general, Teodoro García Egea, told Spanish radio on Tuesday that the trial is proof that the rule of law ‘works’ in Spain, and he urged the pro-independence parties to abandon ‘any aspiration’ for achieving their goals.

Also on Tuesday, PP released a statement rejecting all acts of ‘pressure, coercion and violence’ by the ‘secessionists’ against the Supreme Court judges, who, the party insists, must be allowed to work with all ‘guarantees and independence.’

The leader of unionist Ciudadanos (Cs) in Catalonia Inés Arrimadas spoke in Barcelona about the parliament session being suspended on 21 February ahead of what is set to be a general strike, criticising the parliament speaker Roger Torrent for the decision.

Arrimadas said Torrent was ‘following in the very same footsteps as Mrs. Forcadell,’ the former parliament speaker in precautionary prison for having allowed a vote on independence, and one of the leaders on trial currently.

The Cs leader further accused Torrent and Forcadell of ‘closing parliament whenever they want, using it as a megaphone for separatism, not abiding by the law.’