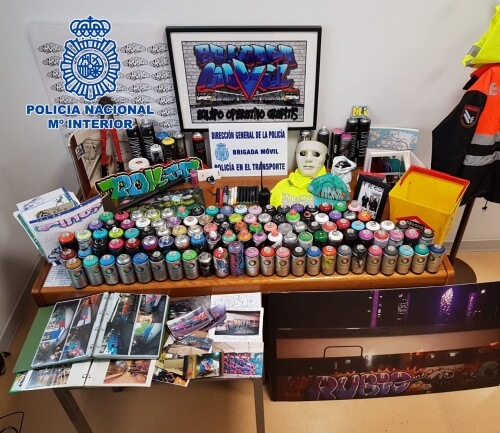 Spanish police have detained 18 graffiti taggers who operated in Spain and Italy, forcing trains to a standstill so they could paint them and in one case assaulting police and security guards.

One of these taggers was placed in provisional custody and three others were banned from approaching railway facilities, police said in a statement, adding the investigation continued.

The gang made headlines in October and November last year after pulling the emergency brakes four times in Madrid’s underground tubes, forcing the carriages to stop.

In one case, they assaulted ‘several police agents and security agents,’ the statement said.

Police had for several months been looking for the gang of taggers that operated in several Spanish regions and in Milan.

They are accused of having caused more than 650,000 euros in damage.

In December 2016, police said they arrested five suspected members of another gang called the ‘Zorros Viejos‘, or ‘Old Foxes‘.

These operated in much the same way, and were accused of causing over 200,000 euros worth of damage to train carriages around the country.