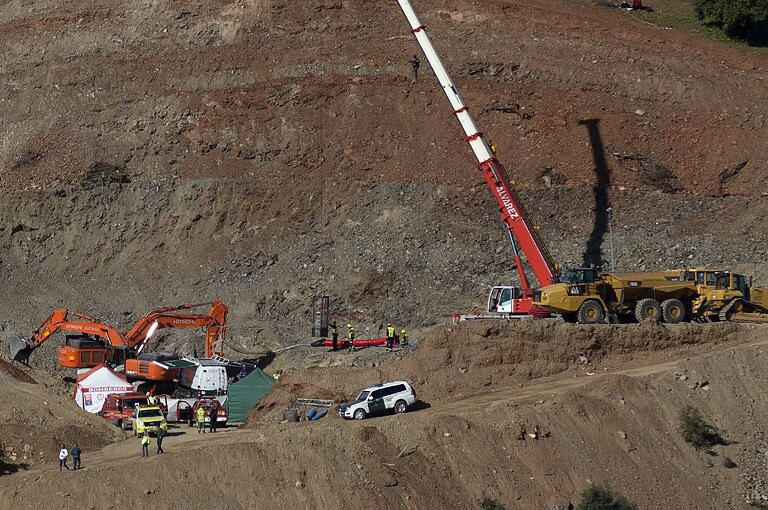 Specialist miners from the Asturias Mining Rescue Brigade have been working all night to try and reach a two-year-old boy who fell into a well in Andalusia in southern Spain 11 days ago.

The team of eight experts had waited days for a vertical shaft to be sunk into the hard, rocky soil, parallel to the well into which Julen Rosello tumbled on 13 January.

The vertical tunnel, drilled parallel to the original hole that the boy fell down, had to be lined by metal tubing before the miners could go down in a specially made cage to start digging.

After the completion of an access platform on the surface, the first two miners were lowered inside the shaft on Thursday afternoon.

The miners have been lowered into the shaft in pairs, taking turns to dig a horizontal, four-metre tunnel to access the well from the side.

It has been reported that it could take up to a total of 24 hours to dig through the final four metres.

It is believed the boy is trapped about 70 metres deep in the well, which has a diameter of about 25 centimetres.

Firefighters and civil guard will provide the miners with logistical support.

Rescuers said they have not lost hope of reaching Julen alive, even there had been no contact with the boy since his fall while playing as his parents prepared a picnic nearby, in the town of Totalan.

They had abandoned an earlier plan to reach the boy with an angled tunnel, due to repeated collapses and landslides.

Coronavirus in Spain figures (22 May)