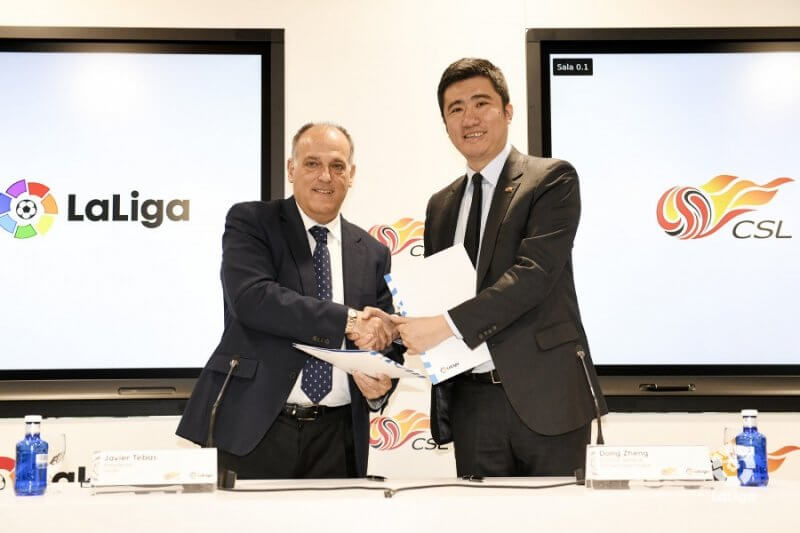 La Liga and China’s Super League have signed an accord to ‘make Chinese football grow throughout the world.’

‘We are going to learn from La Liga as much about developing young players as about promoting our brand,’ Dong Zheng, the general secretary of the Chinese league told a press conference in Madrid.

‘I hope that with the help of La Liga, the Chinese Super League can become a premier league at the Asian and even the World level,’ said Zheng.

The agreement is for four years and covers the sport as well as organisation and financial controls.

Chinese professional football, said Javier Tebas, the Liga president, ‘is looking to organise as we do in the biggest leagues in the world.”

‘We will work together on strategies of financial oversight, one of the concerns of Chinese football with the increasing influx of a lot of private investment,’ Tebas added.

In the last five years, La Liga has applied rigorous economic controls including, cleaning up club accounting and centralising the sale of TV rights.

The agreement also includes collaboration in marketing and digital development, in which ‘we will try to share experiences and make Chinese football grow all over the world,’ Tebas said, who added that the project could help fulfil the ambitions of Chinese president, Xi Jinping, who once said he wants to see China win the World Cup.

‘If we work in Chinese professional soccer, in a strong Chinese league, we contribute to the dreams of the Chinese president of being able to organise a World Cup in China, qualify for a World Cup and, one day, win the World Cup,’  said Tebas.