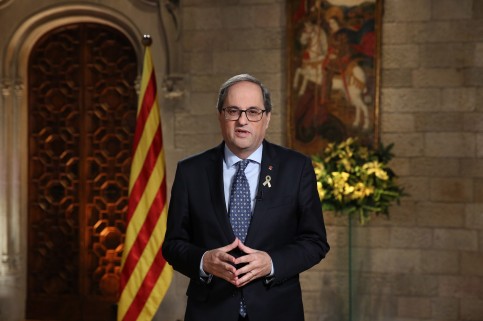 The president of the Catalan government, Quim Torra, urged the Spanish government to start ‘credible, honest and bold dialogue’ with Catalonia in order to find a political solution to the long-going dispute over independence.

In the traditional New Year’s speech, Torra said that his government will continue to ask for ‘dialogue, negotiation and international mediation’ in 2019.

The Catalan president said that a ‘big majority of the Catalan society, 80%, has built a consensus’ on three big issues.

‘First, that we are and we feel republicans. Second, that we don’t accept judicial repression to solve political and democratic questions. And third, that we want to exercise our right to self-determination,’ he explained.

In his speech, Torra announced that his government will recover social laws currently suspended by Spain’s Constitutional Court.

The first Catalan cabinet meeting of the year, expected on 8 January, will agree on the steps to recover those laws, affecting areas such women’s equality, energy poverty, climate change or taxes on empty flats, nuclear plants or bank deposits.

The Spanish government already said that it will withdraw legal challenges against some Catalan social laws presented by the previous People’s Party (PP) administration. In fact, it already did it with a health policy law.

Torra also sent a message to other Catalan parties, urging ‘unity and solidarity’. The Catalan president said that ‘democrats’ should work together to defend ‘civil, social and political rights’ for “everyone”.

‘The struggle for civil rights is linked to the fight for social rights, and the defense of human rights cannot be separated from the defense of the right of self-determination,’ the Catalan president said.