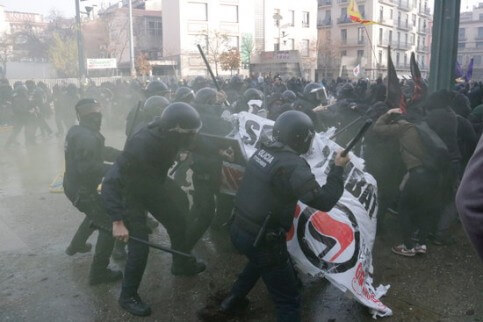 Friday morning saw government officials in Catalonia responding to the outcry over the heavy-handed tactics used by the Catalan police, the Mossos d’Esquadra, against anti-fascist protesters during political rallies on Thursday in the cities of Girona and Terrassa.

Whilst Catalan president Quim Torra called for his interior minister, Miquel Buch, to come up with new guidelines of conduct to avoid such scenes in the future, Buch admitted that some Mossos riot officers ‘went too far’ and that he would not hesitate to expel them if necessary.

The two of them will meet on Sunday to discuss about the issue.

The rallies were held in Girona, northern Catalonia, backed also by the People’s Party (PP), and also Terrassa, in Barcelona’s metropolitan area.

The clashes between police and anti-fascist protestors in the morning in Girona left a score of people injured, including over a dozen officers.

In the afternoon, more confrontations at a rally in Terrassa left some other 20 injured, including an MP from the far-left CUP party.

In radio interviews on Friday morning, Buch condemned the heavy-handed conduct of some officers, saying that ‘some actions did not follow the protocol’. The interior minister also criticised some of the anti-fascist protesters for forcefully breaking through police lines.

‘I am an anti-fascist and I will protest whenever it is required, but I am not violent,’ said Buch, who added that ‘none of this is a part of the pro-independence movement, which has always demonstrated peacefully.’

Referring to CUP MP, Maria Sirvent, who was injured in the hand by a rubber bullet, Buch said he had spoken to her, and he denied that the police had targeted the far-left MP.

Calling the Mossos a ‘democratic police force’ the minister nevertheless said that if it were found that an officer had acted for political reasons, then ‘measures will be taken’.

The Sagrada Familia gets in the Christmas spirit