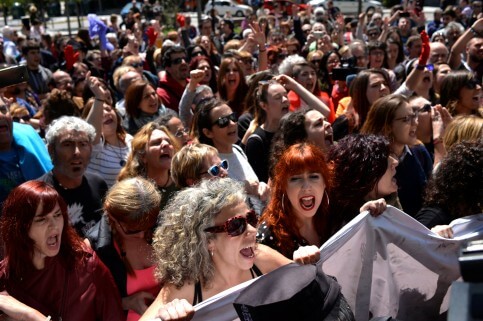 A Spanish court said Wednesday it has confirmed a disputed nine-year jail term given to five men for sexually abusing a woman, despite two out of five judges believing the gang committed rape and calling for tougher sentences.

The men had been accused of raping the woman, then aged 18, at the entrance to an apartment building in Pamplona on 7 July 2016, at the start of the popular week-long San Fermin bull-running festival.

The five filmed the incident with their smartphones and then bragged about it on WhatsApp where they referred to themselves as ‘La Manada‘ (‘The Pack’ in English).

In April, they were handed nine years each in jail for sexual abuse but judges acquitted them of the more serious offence of sexual assault, ruling there had been no violence or intimidation.

Both parties appealed the sentence, which sparked furious, nationwide protests.

‘If you resist they kill you, if you don’t resist you consent. What to do?’ read one sign in a protest.

On Wednesday, the high court of the northern Navarra region upheld the ruling.

It said there had been no proof of violence, and that it was too difficult to discern whether intimidation took place given the lack of obvious show of force or threats towards the victim.

Under Spanish law – which the government is now considering reforming – there has to be evidence of violence or intimidation for an offence to be classified as a sexual assault.

But two out of five of the male judges disagreed, the statement said.

They called the assault ‘an act of intimidation and coercion created by all of them, laying a trap for the victim given the near zero possibility she had of escaping.’

The two judges said it had been rape on the basis of the ‘degrading’ acts inflicted on the victim and the fact that she was left on the ground ‘half naked’, while one of the offenders grabbed her mobile and took out the memory cards.

The two judges concluded each of the men should have been jailed for 14 years, three months and one day.

Prosecutors had asked for prison terms of 22 years and 10 months.

Agustin Martinez, the lawyer of four of the five men, told Spanish television they were appealing the latest court decision to the Supreme Court, asking for their acquittal.

Defence lawyers had argued the victim agreed to the sexual encounter.

But prosecutors pointed out that the victim had met the men just seven minutes before the incident and did not even know their names.

Separately, all five judges ruled that the filming of the assault had violated the victim’s privacy and ordered the court that first judged the case to issue another sentence for that offence.

Letter from Simon Manley to British nationals in Spain

Fines up to €6,000 for travellers to Spain arriving without negative PCR test