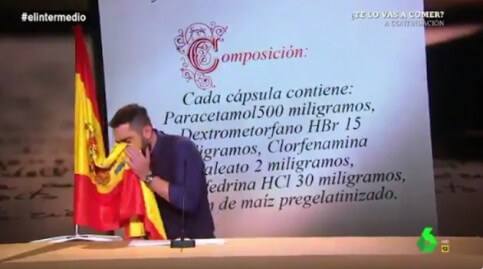 A court in Madrid is investigating the comedian Dani Mateo for a TV sketch during which he blew his nose on the Spanish flag. The entertainer has been summoned to declare this coming Monday.

The police union Alternativa Sindical Policial pressed charges against Mateo for hate crimes and insulting Spanish symbols, accusations that then triggered the investigation.

The gag sparked harsh criticism throughout Spain and especially on social media, ultimately leading to the satirical program ‘El Intermedio’ apologizing and La Sexta TV channel taking the video down from its website.

‘What’s happening to me confirms that the gag was pointing in the right direction,’ said Mateo, in reference to the insults and threats he and his family received.

‘We’re going to kill each other,’ he added. ‘We’re putting symbols before people.’