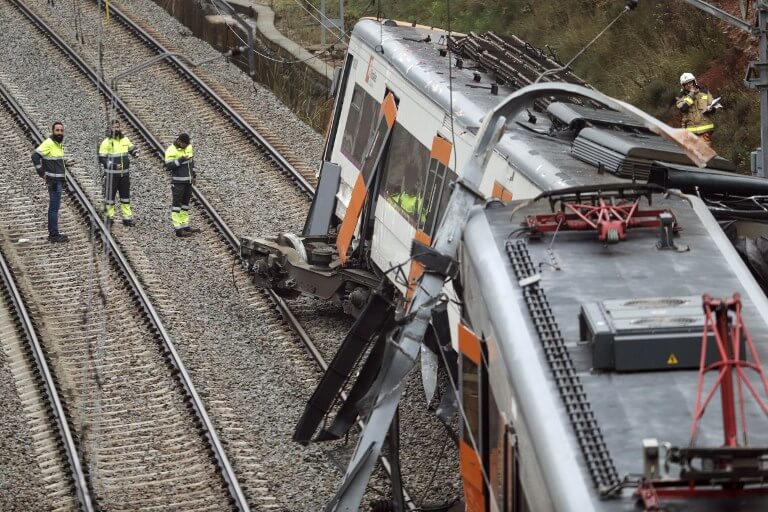 One person was killed and 49 others were injured, five seriously, when a train derailed near Barcelona on Tuesday due to a landslide caused by heavy rains, emergency services and Spain’s rail operator said.

Two carriages of a convoy of six came off the tracks at 6:15 am near the town of Vacarisses, 35 kilometres northeast of Barcelona.

Of the 133 people on board, 44 were lightly injured, five were seriously injured and one person died.

‘The lights went out and there was a lot of confusion. We saw rocks on the track. I was frightened but emergency services arrived very quickly.’

Images broadcast on Spanish television showed rescue workers evacuating passengers. Rocks were piled up on the side of one carriage.

The accident happened between the stations of Vacarisses and Vacarisses Torreblanca on the route between the towns of Manresa and Sant Vicenç de Calders. The train derailed due to a landslide following several days of heavy rain, rail operator Adif said in a statement.

Catalan president Quim Torra went to the scene of the accident and expressed his deep sorrow and condolences to the family of the fatal victim. He also thanked the emergency services for their quick response after the derailment.

The train’s driver saw the landslide and slammed the emergency breaks but was unable to prevent the crash, Catalan newspaper El Periodico reported.

The area was fitted with netting to hold back rocks ‘but it did not resist the landslide,’ Transport Minister Jose Luis Abalos told news radio Cadena Ser. He said his ministry would investigate the cause of the accident.

The derailing of the train in Vacarisses is the third in this area since 2009. In January 2011, a train with 42 people on board derailed in the station of Vacarisses-Torreblanca, in which 11 people suffered minor injuries, among them the driver. In March 2009, another train derailed following a landslide. No one was injured.

Exclusive images obtained by Catalan television, TV3, show the poor condition of the area where the accident happened. In the images, filmed on Sunday by a train driver, water falls dramatically on the tracks, which can be seen partially flooded.

Catalonia has suffered heavy rains in the last few days. Authorities have promised an investigation.

In 2013, 79 people died when a train travelling from Madrid to the northwestern city of Santiago de Compostela came off the tracks. It was Spain’s worst train wreck in decades.