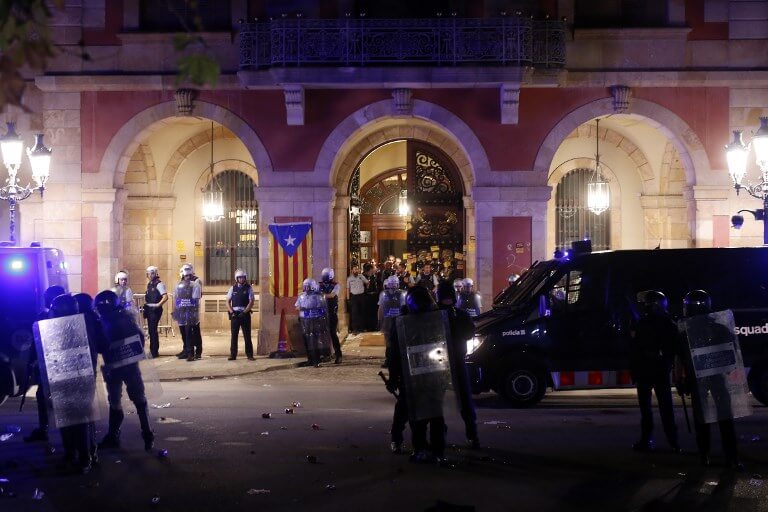 Catalonia’s separatist executive was Tuesday accused of playing a ‘dangerous’ game after the regional leader encouraged radical independence activists to carry out disruptive acts on the anniversary of a banned referendum that culminated in clashes.

Hundreds of separatist protesters knocked down barriers at the regional parliament in Barcelona on Monday evening, clashing with police in stark contrast with the usually peaceful nature of Catalonia’s independence movement.

Analysts said this reflected the movement’s divisions and lack of direction, with some pushing for direct confrontation with Madrid and others calling for moderation, while at the same time trying to keep the spirit of last year’s secession bid alive.

Reacting to the clashes, Catalan government spokeswoman Elsa Artadi acknowledged it was ‘the first time that we are faced with this situation within the independence movement’.

She told Catalan television that a ‘minority’ took part in the unrest.

‘Violence isn’t the way forward,’ Sanchez, who is attempting to negotiate with Catalan leaders and also depends on separatist lawmakers to prop up his minority government, said in a tweet.

Under pressure from more hardline separatists, Torra warned Tuesday that Catalan separatist parties would withdraw backing for Sanchez in the national parliament unless Madrid agrees by November to allow Catalonia to hold a binding self-determination referendum.

‘Catalans’ patience is not infinite,’ he said during a debate in the Catalan parliament. He also asked for ‘serious self-criticism’ from the separatist camp.

‘We must demand that the mobilisation which we need always be non-violent, radically non-violent,’ Torra said.

Later the a Spanish government spokesman said it ‘will not accept ultimatums’ while adding that it remained resolved to maintain a dialogue.

Monday’s clashes forced the leader in Catalonia of anti-secession party Ciudadanos (Cs) to leave the building under escort in unrest that topped a restive day in the northeastern region that remains sharply divided on independence.

Radical activists called by a group naming itself the Committees for the Defence of the Republic (CDRs), many of them hooded, cut roads and railway lines, encouraged by Torra – a staunch independence supporter himself.

‘The (independence) movement is divided between radicals and an executive that isn’t sure where to go, and which is also divided,’ said Oriol Bartomeus, politics professor at the Autonomous University of Barcelona.

‘I think Torra shares the CDRs’ ideas but he knows perfectly well that the independence movement will lose if it goes down that road. Torra is in the middle,’ he said, describing the situation as ‘very dangerous’.

Catalonia’s banned independence referendum on 1 October 2017 was marred by a violent crackdown by Spanish National Police, who were ordered to stop peaceful voters from casting their ballot, in footage that went around the world.

A year later, the tables appeared to have turned with images of radical independence supporters cutting roads and railway lines, muscling their way into a government building and clashing with police.

Miquel Iceta, head of the Socialist party in Catalonia (PSC), told Spanish radio the unrest ‘highlighted that a regional president cannot encourage mobilisation if he is then unable to guarantee security’.

He said it also showed ‘that the Catalan government’s discourse, as it is far from reality, generates frustration and violence among its most radical followers’.

Even former Catalan president Carles Puigdemont, who is in self-imposed exile in Belgium after last October’s secession bid, condemned the violence.

‘If they are hooded they’re not from the 1-0,’ he tweeted referring to the referendum last year on 1 October, which went ahead despite a court ban and eventually led to a short-lived unilateral declaration of independence at the end of the month.

‘If they use violence they’re not from the 1-0. We did it with our faces uncovered and in a peaceful way,’ Puigdemont added.