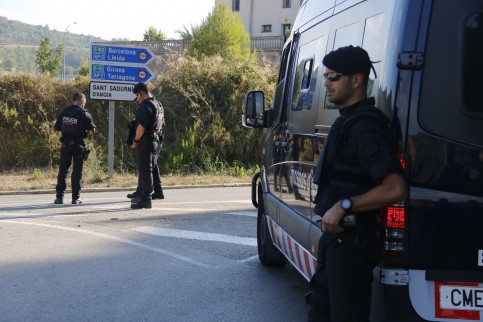 Spanish investigators have not found any signs that the Islamist cell which is suspected of carrying out last year’s jihadist attacks in Barcelona and a nearby seaside resort had international connections, a senior investigator said Thursday.

‘We have not found to date in any of our lines of investigation evidence of a reliable external catalyst for the attacks,’ Lieutenant Colonel Francisco Vazquez of Spain’s Guardia Civil police told AFP.

The Guardia Civil, along with Spain’s National Police and Catalonia’s regional police force, the Mossos d’Esquadra, are carrying out the investigation into the August 2017 attacks.

A total of 16 people were killed when a van drove into crowds on the popular Las Ramblas boulevard in the heart of Barcelona and in a knife attack in the nearby resort of Cambrils.

The Islamic State group claimed responsibility for the attacks.

Trips to France and Belgium by members of the cell — allegedly made up of an imam and a group of youths from the town of Ripoll located about 100 km (60 miles) north of Barcelona — raised suspicions that they may have had connections with Islamist cells in those countries.

His statements contradicted Spanish media reports that the mastermind of the attacks is still on the run, and that when the attacks took place he was in a central European country.

‘We have not found any evidence to indicate this,’ Vazquez said when asked about the reports.

He added that there is a suspected jihadist in jail who has said there is ‘a cell in France that is very similar to the one in Ripoll’ but ‘beyond this, we have found nothing’.

Eight members of the cell suspected of carrying out the attacks died — six were shot by police and two others, including the imam, were killed the day before the Barcelona attack during an accidental explosion while making bombs.

Two others are in jail awaiting to be tried in Madrid while another two were released on bail before their trial.