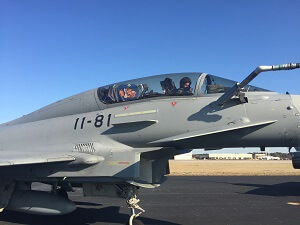 Spain’s defence ministry said on Tuesday that it has opened an investigation after one of its Eurofighter jets accidentally fired a missile in the skies over Estonia during a routine training mission.

‘A Spanish Eurofighter based in Lithuania accidentally fired a missile without causing any harm,’ the ministry said in a statement, adding that the incident happened Tuesday afternoon ‘in an area of southwest Estonia authorised for this type of exercise’.

‘The air-to-air missile has not hit any aircraft. The defence ministry has opened an investigation to clarify the exact cause of the incident,’ it added.

Two Spanish Eurofighter jets, and two French Mirage 2000 jets, were taking part in the training exercise in the Baltic country, the ministry said. After the incident the jets returned an air base in Siauliai in northern Lithuania where they are based.

The missile carried up to 10 kilos (22 pounds) of explosives and is designed to self-destruct in the event of such accidents, but it may have landed on the ground, according to Spanish media reports.

Estonian Prime Minister Juri Ratas said on Facebook ‘thank God’ there were ‘no human casualties’ due to this ‘startling incident’, and which he called ‘extremely regrettable’.

‘I am sure that the Estonian defence forces will, in cooperation with our allies, identify all the circumstances of the case and make every effort to make sure that nothing like this happens again,’ he added.