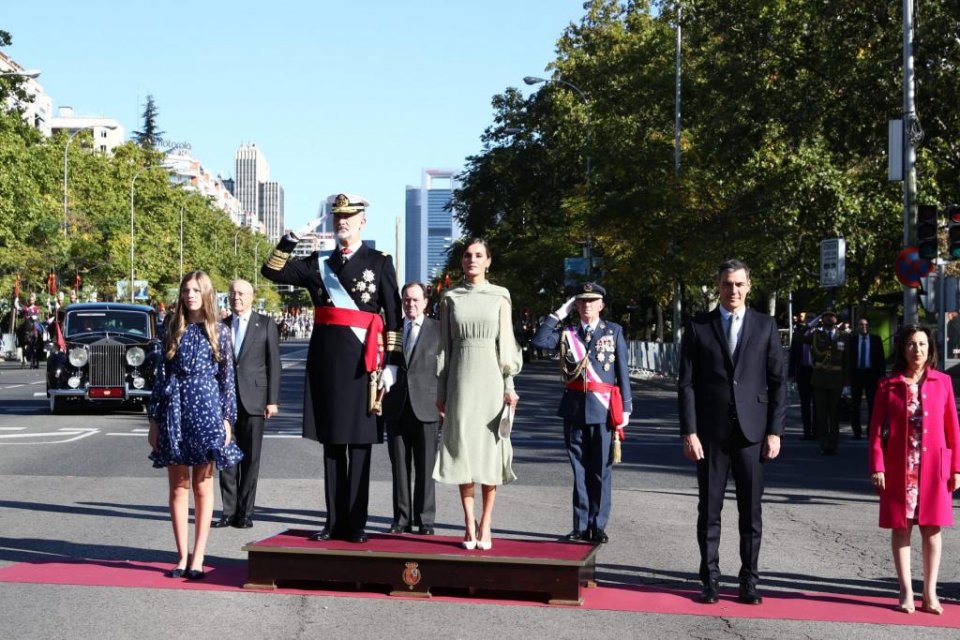 Spain celebrated its ‘National Day’ on Wednesday, with a massive military parade of 4,000 from the Army, Navy, Air Force, Guardia Civil and the Spanish Legionnaires marching along Madrid’s Paseo de la Castellana. The day is also ‘Armed Forces Day’. 150 vehicles and 86 aircraft were also involved.

King Felipe VI, who is head of the armed forces, attended with Queen Letizia and their daughters, as well as the Spanish Prime Minister Pedro Sánchez, and other leading politicians.

This year Sánchez reportedly kept the king waiting at the Plaza de Lima, breaking protocol, and – as was the case last year – he was then booed and greeted with shouts of ‘resign’ and ‘resignation’.

The culmination of the event was a fly-by from the Spanish Air Force acrobatics team, the Patrulla Águila, who released a stream of red and yellow smoke to replicate Spain’s national flag across the sky. There was also the traditional parachutist who landed with the Spanish flag close to the monarch. As always, one of the highlights of the day was the Spanish Legion’s quick march and goat mascot.

The Día de la Fiesta Nacional, previously also known as the Dia de la Hispanidad, is a public holiday in Spain. The 1987 law that made 12 October a national holiday said it commemorates ‘the linguistic and cultural projection of Spain outside of its European limits’. In short, it commemorates the date in 1492 that Christopher Columbus ‘discovered the Americas’ for Spain.

However, some Spanish citizens see the public holiday as a misguided celebration of colonial history, with the centuries-long colonisation of the Americas by European nations having brought violence, disease and death to indigenous people.

Some political parties, particularly in Catalonia, the Basque Country and Navarra, refuse to mark the National Day, with Basque nationalists absent for the same reason as the pro-independence Catalan parties. Other pro-republic parties such as the left-wing Podemos group also largely shun the national celebrations, because it is led by the Spanish monarchy.

Despite some questioning the Columbus celebration in Spain, the suffering of native populations during that period has not received the same attention or prompted the kind of historical re-evaluation as it has, for example, in the United States, where in many places Columbus Day has been paired or replaced with Indigenous People’s Day, to switch the focus of the annual holiday.