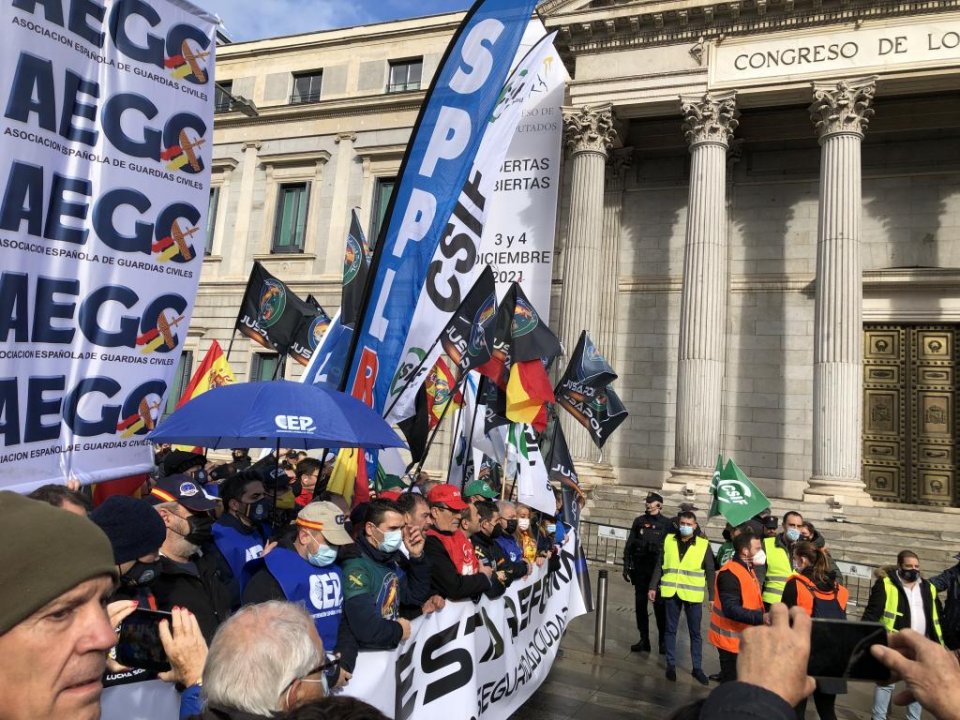 Tens of thousands of police officers from the Spanish National Police and Guardia Civil, their union representatives and supporters, marched through the centre of Madrid on Saturday, past the Spanish Congress, to protest against the government’s plans to reform a controversial security law known by critics as the ‘gag law’.

Critics of the Citizens Security Law passed in 2015 by the previous government, the right-wing People’s Party (PP), have for years said that it gave too much power to security forces in detriment of civil liberties. The powerful police unions, however, say that the proposed changes to the law will make their job more difficult.

A new version of the law promoted by the Basque Nationalist Party (PNV) recently won the support of Spain’s governing left-wing coalition between the socialist (PSOE) party and left-wing Podemos group. Amnesty International and Spain’s Ombudsman Office have also called for the law to be altered.

The proposed law could still undergo changes during negotiations in the Spanish Congress, but as it now stands it would eliminate some of the most contentious parts of the current law. These include the clause that bans holding protests in the immediate vicinity of Congress or Senate buildings and the article that allows border guards to push back migrants who cross the frontier.

A proposed change supported by the government is the allowance for spontaneous protests that now commonly arise from the quick organisation of a march, for example, to respond to a case of gender violence. Currently, organisers of protests or marches are required to tell the authorities beforehand.

Police unions are against other planned modifications, above all one to remove a requirement for citizens to request permission from authorities before filming and publishing videos of officers at work. Last year, Spain’s Constitutional Court ruled that such a requirement for previous approval was unconstitutional.

But police fear that could make their officers easy to identify and thus put them at risk for reprisals. The proponents of the law deny this, promising that the new law is about striking a better balance between liberty and safety.

‘The reform that the government is preparing will only benefit violent protestors and criminals,’ Pablo Pérez, spokesman of the JUPOL union for Spain’s National Police. ‘It puts citizens and especially police officers in serious danger because it ties our hands and feet when facing violence.’

Right-wing opposition parties backed the police protestors. Both the far-right Vox party and the PP that passed the original security law while in power sent their leaders to the rally.

PSOE spokesman Felipe Sicilia said that government wants to ‘adapt the law to a new era’ and rewrite it so as to ‘reduce doubts about the right to gather in public and to protest’.

‘This law is to improve our way of handling public security,’ Sicilia said. ‘And, of course, it means to protect our members of the security forces so that they can work in a professional manner and with legal guarantees.’