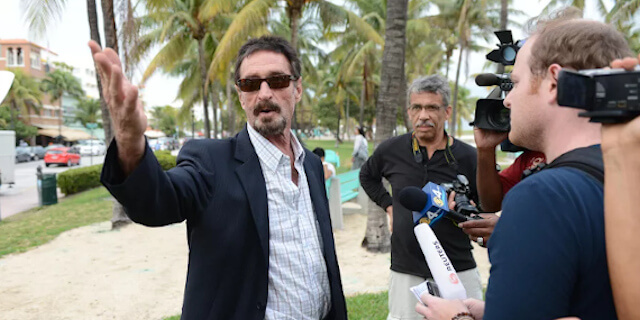 John McAfee, the creator of the McAfee antivirus software, was found dead in his prison cell near Barcelona in an apparent suicide on Wednesday, just hours after a Spanish court had approved his extradition to the United States to face tax charges punishable by decades in prison.

McAfee, who made a fortune with his eponymous anti-virus software in the 1980s, was discovered unconscious at the Brians 2 penitentiary located in Sant Esteve de Sesrovires, Catalonia. Security personnel tried to revive him, but the prison’s medical team finally certified his death, a statement from the regional Catalan government said.

‘A judicial delegation has arrived to investigate the causes of death,’ it said, adding that ‘everything points to death by suicide.’

The statement didn’t identify McAfee by name but said the dead man was a 75-year-old US citizen awaiting extradition to his country.

McAfee had been arrested last October at Barcelona airport and had been in jail since then awaiting the outcome of extradition proceedings. The arrest had come after US prosecutors released an indictment against McAfee for allegedly failing to report income made from promoting crypto-currencies, carrying out speaking engagements, as well as selling the rights to his life story for a TV documentary.

The indictment had claimed McAfee failed to file tax returns from 2014 to 2018, despite receiving ‘considerable income’ from a number of sources. The criminal charges carried a prison sentence of up to 30 years.

Spain’s National Court on Monday had ruled in favour of extraditing McAfee, 75, who had argued in a hearing earlier this month that the charges against him by prosecutors in Tennessee were politically motivated and that he would spend the rest of his life in prison if returned to the US.

The court’s ruling was made public on Wednesday and was open for appeal, with any final extradition order also needing to get approval from the Spanish cabinet.

Born in England’s Gloucestershire in 1945 as John David McAfee, he started McAfee Associates in 1987 and led an eccentric life after selling his stake in the antivirus software company named after him in the early 1990s.

‘These eight months John has spent in prison in Spain have been especially hard on his overall health both mentally and physically, as well as financially, but he is undeterred from continuing to speak truth to power,’ it said.

Happy Father's Day @officialmcafee. Though you are spending the day in prison know that you are loved and appreciated. #FreeJohnMcAfee #FreeMcAfee pic.twitter.com/YFmB36KWfb