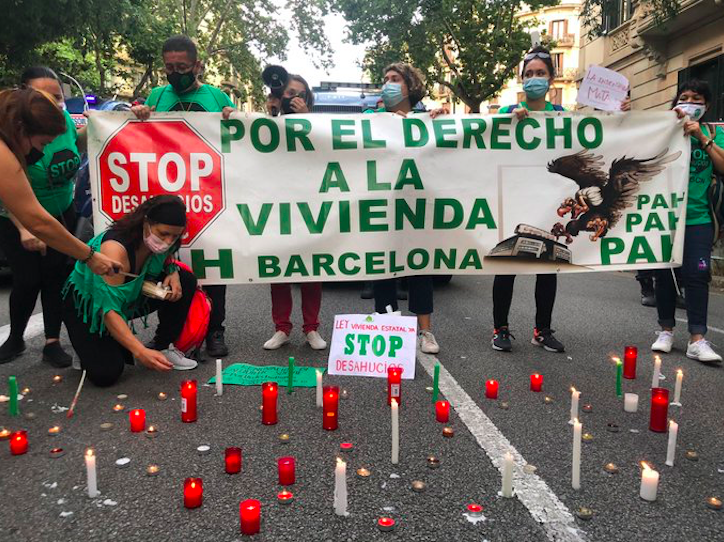 There is increasing support for courts in Spain to revise their eviction criteria, following a spate of suicides from desperate tenants about to be evicted from their homes.

Barcelona’s mayor, Ada Colau, is also calling on Spain’s central government to drop its opposition to the policy of rent controls [see below] recently introduced in Catalonia.

Since the start of the pandemic, a moratorium has been imposed to protect tenants who are struggling to pay rent, which forces landlords to give tenants at least six months’ notice of eviction. The extended notice period is enforced if criteria for exemption is met, such as on the grounds of vulnerability, and is due to expire on 9 August.

In terms of regions, Catalonia has the highest level of evictions recorded at 2,437 in the first three months of 2021. This is almost double the number recorded in Madrid and almost 70% of these were carried out in Barcelona.

This week, another suicide of a tenant about to be evicted has been reported, in the Sants district of Barcelona. The 58-year-old man was about to be visited in his flat by the judicial officials.

A lawsuit had been filed against the tenant in January by the owner of the property and was processed in the local Barcelona court. At that time, the tenant had not paid rent since June 2020, having signed a tenancy agreement in 2018.

Last week, the tenant’s lawyer issued a report from social services to the court about the vulnerability of the tenant and requested the suspension of the eviction.

The court decided that the details provided did not meet the definition of vulnerability and dismissed the request.

She is also requesting that the central government drops its opposition to the policy of rent controls.

How does the rent cap law work in Catalonia?

The rent cap affects 61 cities and towns with over 20,000 inhabitants and with ‘tense housing markets’. This includes the major cities of Barcelona, Girona, Lleida, and Tarragona. All 61 of these municipalities have seen average rent prices increase by at least 20% between 2014 and 2019.

In these areas where affordable housing is scarce, the law dictates that rents must be determined by the Catalan Housing Agency’s Average Price Index. Relevant information on the size and the year buildings were built can be looked up online at the Spanish ‘catastro’ land registry website to see how rent prices compare to others in the area.

Landlords had argued that the areas with rent controls in force would result in fewer properties being available, but the union representing tenants has rebuffed these claims, stating that the number of rental contracts signed in these areas has increased by 11% in comparison to last year. It also stated that rents have fallen by an average of 5% in these areas.

As the recovery from the pandemic continues, it is expected that the number of evictions will continue to increase, and there is increasing support for the process to be revised to protect and support vulnerable tenants. The recent suicides have again highlighted the urgent need for this review.

Remembering my childhood in Sitges