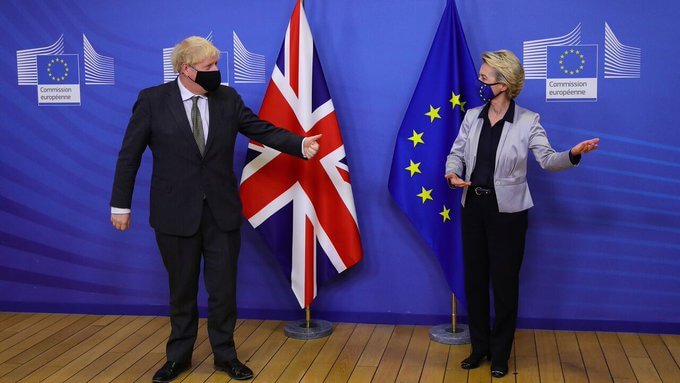 ‘We had a useful phone call this morning,’ the joint statement read. ‘We discussed the major unresolved topics. Our negotiating teams have been working day and night over recent days. And despite the exhaustion after almost a year of negotiations, despite the fact that deadlines have been missed over and over, we think it is responsible at this point to go the extra mile.’

‘We have accordingly mandated our negotiators to continue the talks and see whether an agreement can even at this late stage be reached.’

Sunday had been just the latest in a string of supposedly hard deadlines for the negotiations but, with the UK due to leave the EU single market in 18 days, tensions have also been rising.

On Saturday, the UK took the dramatic step of announcing that armed naval vessels would patrol its waters from 1 January to exclude European boats from the fishing grounds they have shared.

Ursula von der Leyen had made it clear that the EU will respect UK sovereignty after the post-Brexit transition period, but neither side is yet ready to compromise on core principles.

We had a useful call with @BorisJohnson this morning.

We agreed that talks will continue.https://t.co/rZpN4PmS1i