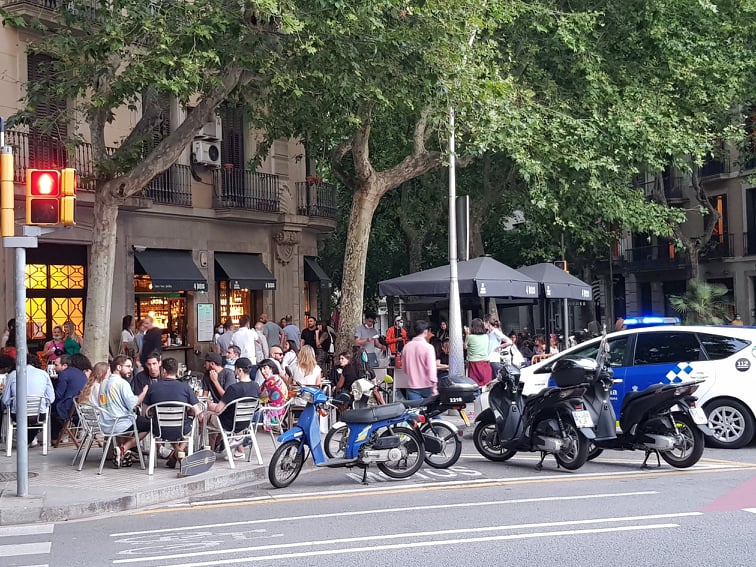 Residents in the city of Barcelona and its north and south metropolitan areas are currently enjoying a first week in Phase One of Spain’s lockdown de-escalation plan, a phase that is expected to last until Monday 8 June – but with confusion over movement between the three ‘healthcare zones’.

The Spanish Health Ministry’s guidelines state that each area of Spain should remain in any one phase for a minimum period of two weeks.

Meanwhile the ‘healthcare zones’ in Catalonia of Camp de Tarragona, the western Pyreness (Alt Pirineu i Aran) and the Ebre region (Terres de l’Ebre) are currently enjoying the first week of Phase Two. They had been the first ‘low-risk’ areas to move to Phase One from Monday 11 May. They are now expected to remain in Phase Two until 8 June.

Girona, Lleida, Central Catalonia – as well as the areas of Garraf and Alt Penedès – had all moved to Phase One from Monday 18 May – and are not expected to move to Phase Two until Monday 1 June.

It was the Catalan government’s strategy to focus on moving healthcare zones through each phase of the de-escalation plan, rather than provinces. Some other regions of Spain also opted for healthcare zones. This was permitted by Spain’s central Health Ministry.

This is despite the fact that the city of Barcelona and its metropolitan areas consist of 40 municipalities, where two-thirds of the population of Catalonia live – and from where many people commute into work each day.

During Phase One, not only can Barcelona residents not leave the city, but residents outside the city boundaries, including areas such as Sant Adrià de Besòs and L’Hospitalet de Llobregat, cannot enter.

The Catalan government has now proposed that Barcelona city and the north and south metropolitan areas ‘merge’ from Monday 1 June, with the Spanish Health Ministry expected to make a decision this Friday. In theory, this would permit travelling between the three areas.

Alba Vergés, responsible for the Catalan health department, said on radio on Monday that the epidemiological evolution was similar in all three healthcare zones, and that it was a ‘good indicator … [to] make us think that we can move forward in this direction.’

Mayor of Barcelona Ada Colau had also come out in favour of merging the three healthcare regions, taking into account ‘the social, economic and mobility reality’, and the fact that the three areas are very interconnected.

Terrace bars open – but only one third

With residents in Barcelona finally enjoying the first week of Phase One, approximately one-third of the city’s bars and restaurants have so far decided to open up their terraces for business. Establishments that have terrace spacing are officially supposed to be occupied at a maximum of 50% capacity, with a 2-metre ‘social distance’ spacing between tables. No indoor service is permitted during Phase One.

According to Barcelona’s association of bars and restaurants, most bars are choosing to wait until Phase Two before re-opening.

During Phase One – and whilst restaurants, bars and cafés are permitted to open their terraces at 50% capacity – groups of up to 10 people are allowed to meet for social gatherings, either outside or in someone’s home (including at restaurant and bar terraces). Guidelines state that social distancing measures must be respected between people who do not already live together.

Wearing face masks has also became compulsory in Spain in closed spaces (including shops and stores), as well as on the street and in public places, yet only if a 2-metre ‘social distance’ cannot be maintained.

We have published all the key rules and measures regarding the four phases in a separate report, together with full details of the current ‘phase status’ for each region and province. The report can be found here: Lifting of lockdown in Spain – full details of all phases for all regions.

Resident in Barcelona Steve O’Brien – who took some of the photos accompanying this report – said that ‘any pretence of social distancing’ had ‘instantly disappeared’ on the first day of the city enjoying Phase One.

‘Terraces are fully occupied,’ said O’Brien on Monday evening, witnessing residents in his neighbourhood enjoying their first day of Phase One. ‘Large groups are gathering on corners for the next table to open up. People are hugging and kissing friends they haven’t seen for ages. Barely a face mask to be seen.’

He added that, ‘Maybe I’m being Mr.Grumpy but this isn’t making me feel very optimistic. It’s great to see some life return to these beautiful streets, but I so hope there isn’t a second wave.’ On Tuesday O’Brien said that, ‘things seem a bit more measured now – which is good.’

Establishments in Barcelona have been unable to open up their pavement terraces and sidewalk cafés – an integral part of the culture of the Catalan capital – since Spain originally commenced its lockdown from 14 March.

Several beach bars, or chiringuitos in Spanish (xiringuitos in Catalan) also reopened at the start of the Phase One week – although many more are preparing to open from next week onwards.

On Monday, Barcelona City Council also announced that individual exercise and walks will also be allowed from 8-11pm on the city’s beaches – a time slot previously set aside for members of sports clubs only.  (Please also refer to the section on Catalonia in this report: Lifting of lockdown in Spain – full details of all phases for all regions.)

The aim of the authorities is to ‘take pressure off’ the morning shift, up until 10am, which has seen the majority of beach-goers.

Barcelona City Council has also been widening pavements in several neighbourhoods, and turning a number of avenues into pedestrianised zones only, in order to help create more space for walking and physical exercise during the the de-escalation of lockdown restrictions.

Further details (in English) of how Barcelona is adapting urban spaces and re-opening establishments during Phase One can be found on the City Council’s website by clicking here.

Coronavirus in Spain update – and 26 May figures