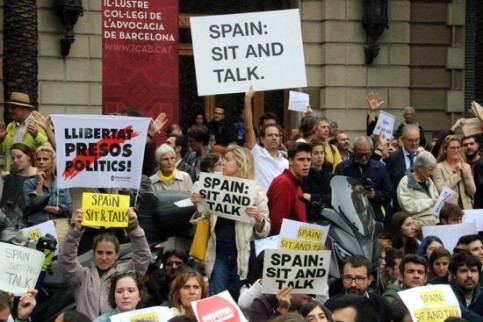 Protests are continuing across Catalonia for a second week, following the Spanish Supreme Court‘s sentencing last Monday of nine Catalan leaders to up to 13 years in prison.

Over 100 organisations have planned a major protest for Saturday 26 October in Barcelona, and which has already caused the postponement of El Clásico match between FC Barcelona and Real Madrid, originally scheduled to be played at the Camp Nou stadium that day.

Last week’s protests in Catalonia led to nearly 600 injuries as some of the demonstrations descended into violence, with clashes between protestors and police, and with many street barricades set on fire.

Coinciding with Spain’s acting prime minister Pedro Sánchez visiting Barcelona on Monday morning, the protest group Tsunami Democràtic called for as many people as possible to sit with their arms raised in front of the Spanish government’s headquarters in the centre of Barcelona, with the aim being to encourage dialogue between the Spanish government and Catalonia. Many held up banners stating, ‘Spain: sit and talk’.

However, Pedro Sánchez left Barcelona at around 1.30pm after meeting with police officers yet refusing to talk or meet with the president of the Catalan government, Quim Torra. Barcelona mayor Ada Colau had also urged Sánchez to speak with Torra after the Catalan leader offered a meeting on Monday.

Tsunami Democràtic has also called on the international community to contribute to dialogue between the Catalan and Spanish governments in order to find a way out of the crisis.

‘We call on the international community to take a clear position in favour of the resolution to the conflict between Catalonia and Spain based on dialogue and respect,’ said the group through social media in their first message in English.

Over 350,000 people are subscribed to the group’s telegram account, and almost 200,000 to their Twitter profile. The platform is currently being investigated by Spain’s National Court for alleged terrorism charges.

On Sunday night in Barcelona, the ‘Pícnic per la República’ group organised what they asked to remain a ‘non-violent’ protest in front of the Spanish government’s offices in the centre of Barcelona.

The group asked demonstrators to bring trash bags to ‘show the world what a garbage dump the Spanish state has turned into’.

After Pícnic per la República called the end of the protest, many people ended up heading down towards Via Laietana, where the Spanish police headquarters are located.

Arrests during the week

There have already been 28 detainees transferred to prison for public disorder in the protests last week.

This comes after the courts of Barcelona, Lleida and Girona decreed that a further eight people arrested for their actions would go to jail on Sunday.

Since the beginning of the protests, around 200 people have been arrested, with 104 of them already taken to court – 43 in Barcelona, 18 in Girona, 30 in Lleida and 13 in Tarragona.

76 of them were released with precautionary measures, some of which have been banned from participating in future demonstrations or were ordered to not be within 500 metres of the headquarters of the Spanish government.

The first instances of arrests took place with 20 on Wednesday in Barcelona, with the most recent being in Girona on Sunday. Furthermore, someone was arrested and later sent to jail in Madrid for riots against the post-verdict protests that took place in the Spanish capital.

Those sent to jail in Barcelona, Lleida and Girona on Sunday were held accountable for public disorder and attacking police officers, with detainees in Lleida sent to jail due to actions related to the general strike across Catalonia on Friday.

Friday’s general strike saw 525,000 people peacefully protest at the Passeig de Gràcia in the afternoon, with many having marched for three days from various Catalan towns to come together in Barcelona.