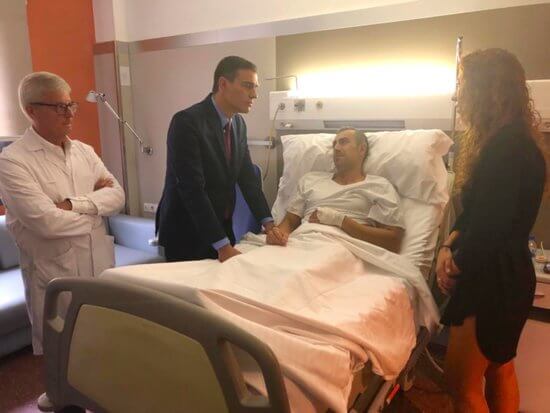 Sánchez visited police officers injured in the recent protests against the sentencing of Catalan independence leaders.

In a letter, Torra told Sánchez, ‘as we have been informed by the media of your visit to Catalonia, I wanted to notify you of my availability to meet with you today,’ expressing his ‘wish’ to speak with the acting prime minister ‘without imposing any conditions’.

Torra also regretted that Sánchez chose not to speak to him on the phone. ‘As you know, I called you twice this past weekend and both times you were unwilling to take my call. I must say that I do not take that as a positive sign of a willingness to engage in dialogue,’ he wrote.

Torra’s letter was also a response to a letter from Sánchez calling on the Catalan president to ’roundly’ condemn the recent violent protests, a charge Torra rejected at the weekend, saying ‘I have always fought against and condemned violence.’

Sánchez’s letter to Torra also reminded the Catalan president that he has a duty to ensure the safety of the public and preserve social harmony, obligations that the acting Spanish prime minister said Torra had failed to live up to in recent days.

In his reply on Monday, Torra referred to ‘the obligations of any leader’, which he said consist of respecting ‘citizens’ human, civil and political rights,’ fostering dialogue ‘with those who think differently,’ and allowing citizens ‘to express themselves democratically.’

The Barcelona mayor, Ada Colau, however, said on Monday that she had received a call from Sánchez, in which she urged him to talk to Torra. ‘We should always answer the phone,’ the mayor said on Catalunya Ràdio.

Colau added that if the two leaders were not going to talk with each other for the moment, then they should at least find another way to begin ‘de-escalating the conflict’, and she offered herself as a possible intermediary.

Whilst rejecting to meet Torra, Sánchez focused on meeting police officers injured in different hospitals in Barcelona, as well as those in the Spanish National Police headquarters building on Via Laietana.

Accompanied by Spanish interior minister Fernando Grande-Marlaska, Sánchez gave his ‘acknowledgment, thanks, solidarity and support’ to the police corps on Via Laietana, telling him that demonstrators ‘probably want to persist with this crisis, but we are stubborn’.

According to Sánchez, ‘it is clear that the radicals and violent groups have decided that Barcelona is the theater of operations.’ Following meetings with the police, the Socialist (PSOE) leader then also met with some injured journalists.

At about 1.30pm, Sánchez concluded his visit to Barcelona without meeting Quim Torra.

Franco’s remains to be exhumed on Thursday