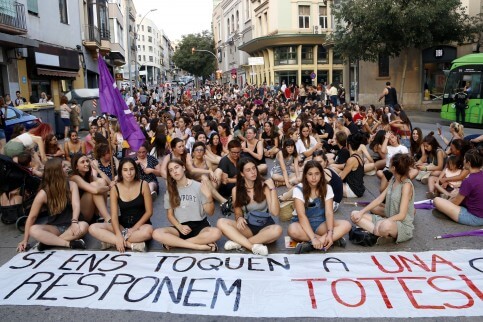 The trial against six men who have been accused of sexually assaulting a then 14-year-old girl in 2016 in Manresa, Catalonia, began on Tuesday, sparking a large protest in the central Catalan city.

While the public prosecutor is seeking up to 12 year sentences for sexual abuse – as was initially the case with Pamplona’s infamous ‘wolf pack’ – the private prosecutor is demanding that they be charged with rape, which carries sentences of up to 25 years.

The public prosecutor could, however, decide to seek higher charges following the girl’s testimony. She is expected to testify at Barcelona’s Regional Court on Monday, where she will have to speak behind closed doors as she is still a minor. Her friends are also expected to testify on Monday.

A seventh man is accused of failing to interfere in her favour as the six men took advantage of her while he watched and masturbated.

The events in question took place at a party at an abandoned warehouse in Manresa three years ago. The teenager says that, while under the effects of drugs and alcohol, she was taken to an adjacent shed by one of the accused who then proceeded to have sex with her against her wishes.

After having sex with her, she says he summoned the other accused over to where they were: ‘It’s your turn now – just 15 minutes each.’ She says the six of them took turns raping her before two of them then assaulted her again.

The defendants categorically refute all accusations, with one claiming that he has no idea how his DNA ended up on the minor’s clothing, although they do admit to attending the party. DNA of the five other men was not identified.

They have spent between 11 and 20 months in pre-trial detention, with the man whose DNA was identified spending the longest time behind bars.

On Tuesday Manresa saw some 300 women protest the events surrounding the case and violence against women, with many carrying signs with slogans including ‘If they touch one of us we all respond’ or ‘I don’t want to be brave, I want to be free’ as they cut off traffic on one of the city’s main streets.