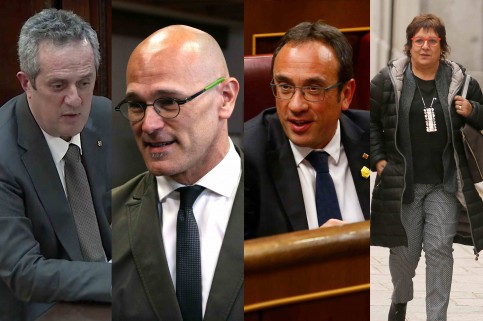 The United Nations Working Group on Arbitrary Detention (WGAD) has now called for the ‘immediate’ release of four more Catalan politicians, with some having already spent up to 20 months in preventive detention.

A month after its first report calling for the release of three Catalan independence leaders, the UN panel is now focusing on the cases of Joaquim Forn, Raül Romeva, Josep Rull, and Dolors Bassa, ministers of the Catalan government that pushed for a referendum and declared independence in 2017.

According to the UN’s group, the pre-trial detention of the four politicians is ‘arbitrary’ and thereby contravenes the Universal Declaration of Human Rights.

Forn, Romeva, Rull, and Bassa are part of the 12 Catalan leaders who sat in the dock at Spain’s Supreme Court in the independence trial, and are now waiting for the final verdict.

The first UN report on the Catalan leaders focussed on the cases of Jordi Sànchez and Jordi Cuixart, political activists at the time of the referendum and their arrests, as well as Oriol Junqueras, the vice president of Catalonia in 2017.

Jordi Sànchez has since gone on to become a politician and was elected as an MP in April’s general election.

After the release of the first report, the current Catalan vice president, Pere Aragonès, said that the UN ruling forces Spain to choose ‘to stand either on the side of those who comply with the United Nations, or those who don’t.”

Carles Puigdemont, the former Catalan president in exile in Belgium, tweeted that ‘to have political prisoners detained in abusive conditions, and to have the UN tell you that, is a complete rejection of the narrative that Spain is a model democracy.’

‘Violating the Universal Declaration of Human Rights is a shame for a country in the European Union,’ Puigdemont added.

After the first report was published, the Spanish government’’ response followed swiftly, casting doubt on the ‘impartiality’ and ‘independence’ of the report.