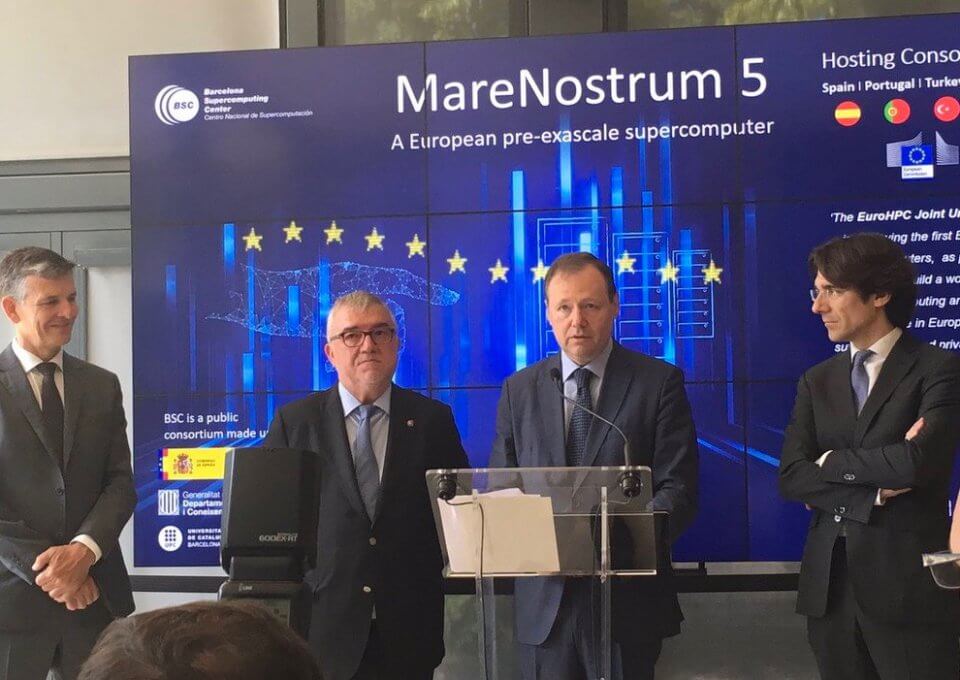 Barcelona is to host one of Europe’s three most powerful supercomputers from 1 January 2021, after being granted 100m euros by the EU – and this machine, called MareNostrum 5, will aim to rival the American and Asian markets.

MareNostrum 5 will host an experimental platform to create supercomputing technologies ‘made in Europe’. It will consist of a heterogeneous supercomputer adapted to the new requirements of supercomputer users, with a special focus on Artificial Intelligence (AI).

Barcelona Supercomputing Center‘s director, Mateo Valero, announced on Monday that the aim is to develop European technology ‘in order that MareNostrum 6 only uses European processors’. The sixth of this series might be real by 2025.

He explained that at the moment chips are imported from the US. ‘Now every chip from Nvidia costs 10,000 euros, and many are needed,’ he argued. ‘We want to be the Messi of supercomputing.’

For him, supercomputer is especially key in order to rival the rest of the world in AI. Medicine and environment are other areas expected to benefit from MareNostrum 5.

‘We want to be the Messi of supercomputing.’

In the presentation, European Commission’s director general of Communications Networks, Content and Technology, Roberto Viola, also emphasised that the new supercomputer will rival the other world-class hubs.

‘Today we have to be happy, because the fastest supercomputer in the US is 140 petaflops, and the one we are announcing in Barcelona will be 200 petaflops,’ he said, admitting that in 2021, when the new machine is up and running, some other is expected to have surpassed this speed.

Yet in order to keep pace with this race for the fastest computer in the world, Viola said that the EU is already planning to develop machines ‘5 to 7 times faster’ than the MareNostrum 5, and explained that the Commission will spend 3 billion euros in supercomputing in its next budget.

MareNostrum 5 is expected to cost 223m euros. Half of its budget will come from the EU research grant, and the other half from the countries which joined Barcelona’s bid: Spain, Portugal, Turkey and Croatia. Ireland is considering to join the project.

Catalonia’s business minister, Àngels Chacon, also said that the new project will contribute to break this ‘polarization’ between China and the US in this area.