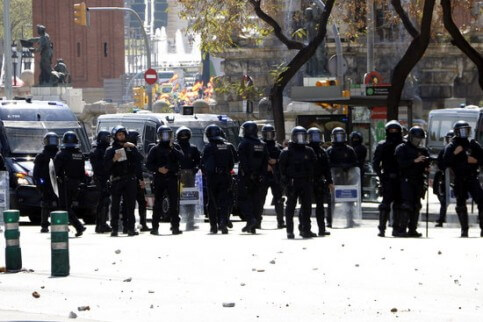 Police arrested 7 anti-fascist demonstrators on Saturday in Barcelona after some threw stones and eggs at a security cordon that separated them from a far-right Vox party event.

Hundreds of anti-fascists demonstrated nearby, amid high security measures to keep both events apart.

There were scenes of unrest as Catalan police agents (the Mossos d’Esquadra) tried to maintain the security cordon.

As a result, seven people were arrested. Five others were injured, most of them for minor injuries, including one police officer.

Political parties from across the Catalan political spectrum – including some in favour and against independence – condemned the presence of the far-right in the city and defended democratic values.

Socialist mayor candidate Jaume Collboni said the Catalan capital is an ‘open’ city and insisted there is no room for ‘hate speech’.

From the pro-independence front, ERC’s Gabriel Rufián said his party will always create a ‘wall against extremists’.

Coronavirus in Spain full update (11 May)