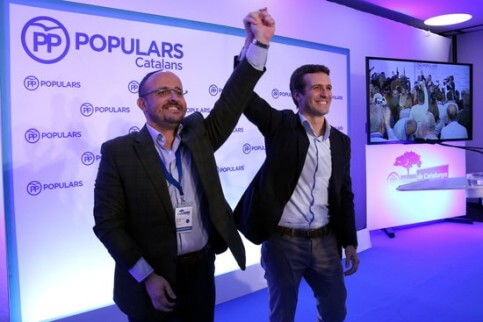 The People’s Party (PP) appointed a new leader in Catalonia on Saturday in an extraordinary congress after the party head until now, Xavier García Albiol, announced his intention to give up his seat in parliament and leadership one month ago.

Alejandro Fernández, MP for Tarragona constituency, was elected with 97.1% of the votes.

In his first speech as PP head in Catalonia, Fernández proposed a plan with incentives ‘to protect the non-nationalist 53% of citizens’ in the country.

For instance, he suggested to provide financial aid to those teachers and judges who want to move out of Catalonia.

Fernández claimed that the parties in favour of a Catalan Republic, now in power, have been using’unlimited resources’ for their supporters.

Therefore he believes that the solution for the conflict will only come ‘when the non-nationalist 53% of citizens has access to the resources, recognition and social dynamism of the other 47%’.

‘If they promote the most talented people for secession, we will do the same to defend the opposite.’

His aim is for unionists to reach again 70% of the support, something not seen since the increase of pro-independence support at the beginning of the 2010s, from some 20% to levels nearing 50% in a matter of years.

For him, once 70% of unionists are reached, it will be time for dialogue. Fernández has admitted that dialogue among Catalans is an unresolved matter.