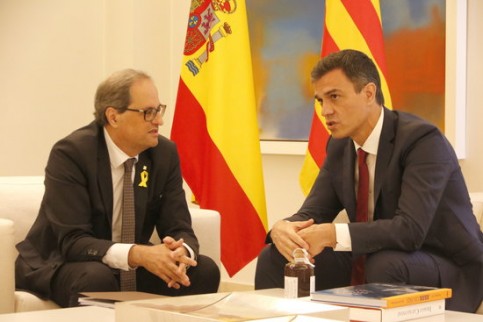 The Catalan president Quim Torra withdrew support from the Spanish government on Friday after the public prosecutor confirmed the accusations of rebellion against pro-independence leaders and requested prison sentences of up to 25 years.

The head of the pro-independence ruling coalition in Catalonia confirmed that they will not vote in favour of the 2019 Budget. Without their votes, it is less likely that Spain’s Prime Minister Pedro Sánchez will have his budget approved.

Pro-independence parties repeatedly demanded a ‘gesture’ from Sánchez, showing that his government was not as tough on Catalonia as his predecessor, the conservative Mariano Rajoy, ousted from office thanks to the support from Catalan parties.

The Attorney General, representing the Spanish government in the case against pro-independence leaders, lowered the accusations from rebellion to the lesser offense of sedition. According to Torra, this was ‘not a gesture, but an absolute disdain for the incarcerated democrats’.

Yet, the Spanish government stressed that the Attorney General’s prison requests were ‘professional, technical and juridical,’ thus ruling out any influence in the decision.