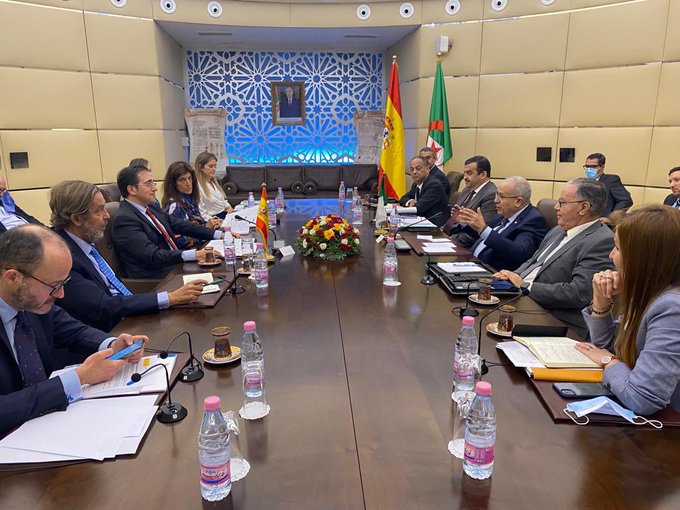 Energy supply experts have highlighted a risk that Spain’s gas supplies could be reduced significantly in the near term, as a pipeline arrangement between Algeria and Morocco nears expiry, with no alternative arrangements in place.

Spanish Foreign Minister, José Manuel Albares, travelled to Algiers on Thursday to meet with his Algerian counterpart Ramtane Lamamra, launching a diplomatic offensive to preserve its essential stream of Algerian natural gas. The trip had not been scheduled in advance and was announced by Spain’s foreign ministry earlier this week. Albares was accompanied by top executives from Naturgy and Enagás, two of Spain’s biggest energy corporations.

Algeria has historically pumped large volumes of gas into Europe, via Morocco. However, with a continued stand-off between the two countries, the existing pipeline arrangement that is nearing expiry is in danger of terminating permanently.

It is feared that the impact of this will risk more price hikes for consumers in the months ahead, with the colder winter months approaching and demand increasing, with alternative sources of gas diminishing.

Africa’s largest natural gas exporter, Algeria, has supplied several billion cubic metres of gas each year to both Spain and Portugal since 1996, using the Gaz-Maghreb-Europe (GME) pipeline. Both Naturgy and Enagás are stakeholders in the pipeline.

The contract for the use of the GME, however, is due to expire at the end of October and renewing is likely to be complex, as Algeria and Morocco have effectively severed ties in recent months, over ‘hostile measures’.

The Algerian Energy Minister, Mohamed Arkab, had previously explained to Spanish Ambassador, Fernando Moran, that Algeria was able to transfer its gas exports to Spain via an alternative undersea route, therefore by-passing Morocco.

However, as the expiry date looms on the existing contract, it is looking increasingly unlikely that an alternative route can be secured in time, along with any chance of renewing the GME contract.

Speaking about the situation, Maghreb geopolitics expert, Geoff Porter, said that ‘a deal to continue the GME agreement before 31 October is very unlikely’. He went on to say that ‘in light of the lack of diplomatic channels between Rabet and Algiers, it’s difficult to see any pathway for negotiations’.

Since the pipeline arrangement was established, Morocco has benefitted from the ability to buy gas for its own use and receive additional amounts as transit fees in kind, by allowing the supply to run through the pipeline in its territory.

One expert has stated that this amounts to approximately $50 million worth of gas per year.

The difficult diplomatic situation between the two countries has escalated in recent months, through a combination of factors, including support from Algeria of the Palestinian cause and Morocco’s normalisation of ties with Israel, in exchange for Washington recognising Rabat’s sovereignty over Western Sahara.

Experts now think that Algeria is intent on hitting its rival financially, by removing its supply to Europe using the GME pipeline through Morocco.

North Africa Energy Expert, Roger Carvalho, said that ‘Algeria could deprive Morocco of transit fees, which are a major and stable source of revenue, but also of gas supplies at a good price.’

Highlighting the possible impact on supplies to Spain and Portugal, he said that ‘Algeria has obligations and can’t deprive itself of international revenues from these contracts, so it has to find another delivery route’.

In the Spanish Congress on Wednesday, Foreign Minister Albares had responded to questions from MPs regarding his upcoming trip to Algeria, saying that supplies were guaranteed. ‘The supply of gas to Spain is not in danger because our Moroccan and Algerian friends want to work together in this field,’ he said.

After the meeting in Algeria on Thursday, Albares told reporters that he was ‘reassured about the continuity of natural gas supplies’, calling Algeria ‘a first-rate partner for Spain’.