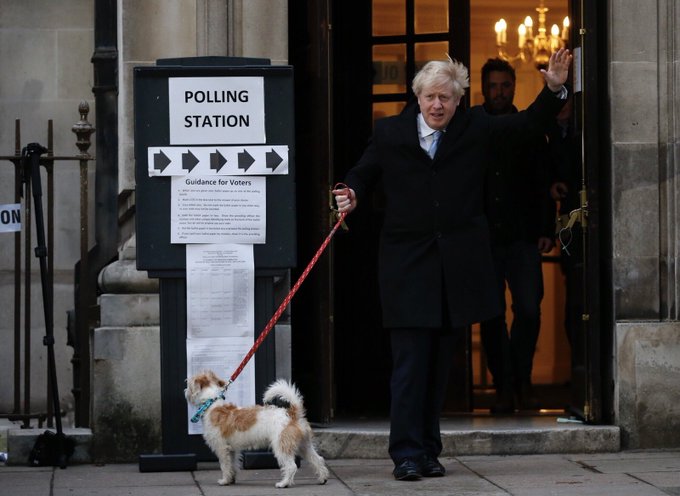 Boris Johnson has secured the biggest Conservative Party majority in a General Election since Margaret Thatcher in the 1980s, after Britain went to the polls on Thursday 12 December.

With all but one of the results declared for the 650-seat British parliament, the Conservative Party have secured 364 seats – its biggest majority since 1987.

The main opposition Labour Party, meanwhile, lost 59 seats to end up with 203 – its worst results since 1935. Labour leader Jeremy Corbyn admitted that it had been a ‘very disappointing night’ and has already announced plans for his eventual departure, after a period of ‘reflection’.

Boris Johnson hailed the huge election win as a political ‘earthquake’, clearing the way for Britain to finally leave the European Union next month after years of political deadlock.

Speaking after winning his own seat as an MP, Johnson declared that voters had given him ‘a powerful new mandate to get Brexit done’. The promise to ‘Get Brexit Done’ was his party’s only campaign motto.

The anti-Brexit Liberal Democrats announced they would be replacing Jo Swinson as leader. She lost her seat in Scotland to the Scottish National Party (SNP).

The Conservatives had been ahead in all opinion polls for weeks but the scale of their victory was still unexpected. Johnson now has five years to govern until he is obliged to call another general election.

With such a large majority, Johnson will now be able to get the Brexit deal he struck with Brussels through parliament in time to meet the next deadline of 31 January.

Ratifying the deal would formalise the end of almost five decades of EU-UK integration, although both sides will still need to agree a new trade and security agreement.

The result is also a personal victory for Boris Johnson, a former London mayor and foreign minister who helped lead the Brexit campaign to victory in the 2016 EU referendum.

US President Donald Trump tweeted his congratulations ‘to Boris Johnson on his great WIN!’ He wrote, ‘Britain and the United States will now be free to strike a massive new Trade Deal after BREXIT. This deal has the potential to be far bigger and more lucrative than any deal that could be made with the E.U. Celebrate Boris!’

Jeremy Corbyn had promised a second referendum on Brexit, in a bid to appeal to half of British voters who still want to stay in the EU. But the focus of Labour’s campaign on a radical programme of economic change, including re-nationalising some key industries, failed to attract traditional voters.

Speaking in the early hours of Friday morning, Corbyn said: ‘Brexit has so polarised and divided debate in this country, it has overridden so much of a normal political debate.’

The Scottish National Party (SNP), which wants to stop Brexit and deliver an independent Scotland, gained 13 seats to reach 48. The result in Scotland will help SNP leader Nicola Sturgeon set out her plans for a second referendum. She has already said Johnson must allow Scotland ‘the choice of something different.’

Elsewhere, Nigel Farage’s Brexit Party failed to win any seats, but he claimed to have helped Johnson standing down his own candidates in Tory-held seats.

Johnson has promised to put his Brexit plan to parliament before the Christmas break, although it will not likely be ratified until January.

He has then just 11 months to agree a new partnership with the EU before a post-Brexit transition period ends in December 2020.