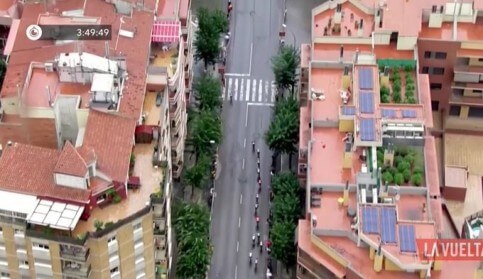 La Vuelta is a gruelling 21-day cycle race through Spain and parts of France and Andorra, and is the final Grand Tour of the year, finishing on 15 September.

On Saturday La Vuelta passed through Catalonia, and apart from the usual excitement of the race, viewers could enjoy picturesque images, including that of the iconic Montserrat mountain, becoming a hill for riders.

But not only did the aerial shots provided by the organisation show beautiful landscapes of mountains, towns, fields … they also revealed a marijuana farm on a rooftop in Igualada, central Catalonia, less than a kilometre from the finishing line.

Some spectators noticed and the footage went viral on social media, drawing the attention of the Catalan police, the Mossos d’Esquadra.

Officers went to the flat and confiscated some 40 plants. A police inquiry has now been opened in order to find the owners of the farm, with no arrests made so far.

The flat was occupied but no-one was to be found when the police arrived at the site.

Growing marijuana in Spain is illegal despite consumption of the drug being decriminalised.

Almodóvar’s ‘Pain and Glory’ to represent Spain at Oscars