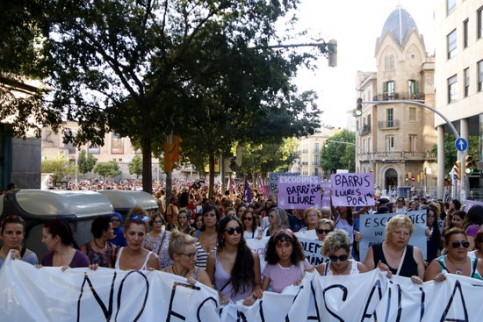 Hundreds took to the streets in the city of Manresa in Catalonia on Tuesday evening to protest another gang rape incident that saw four men held in custody without bail.

In the latest incident, a 17-year-old girl says she was raped by four men of North African origin, aged between 18 and 24, in a squat in the city’s old quarter.

At the same time, another six men are being prosecuted in a Barcelona court for the gang rape in 2016 of 14-year-old girl (at the time), also in Manresa.

Meanwhile, earlier in the month three men were held in custody after being accused of raping a young woman on 24 June, in the Tarragona town of Cambrils.

The incidents have echoes of the infamous ‘Manada‘ (Wolf Pack) case in Pamplona, in which the Supreme Court converted the original verdict of sexual abuse to rape.

The sentencing of five men last year sparked widespread protests all over Spain, leading the high court to review the verdict and raise the prison sentences from 9 to 15 years.

In this latest incident, which allegedly took place last Sunday, the girl was assaulted by the men while alone in a room of the house where she was asleep on a mattress.

The judge justified detaining the men due to the seriousness of the allegations, arguing they are flight risks and allegedly used ‘intimidation and violence’ during the assault.